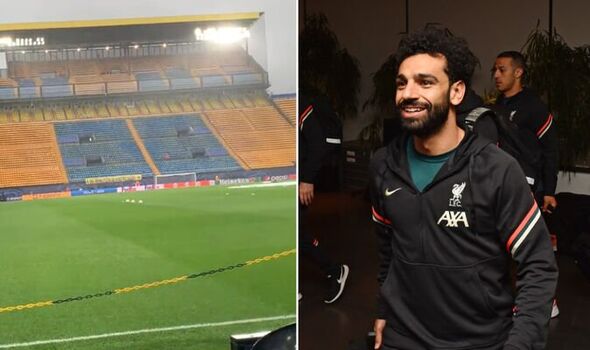 Liverpool’s Champions League semi-final clash against Villarreal was hit by dreadful weather ahead of kick-off on Tuesday as a downpour of rain resulted in a yellow weather warning. And as the referee tested the surface of the pitch before the match, the ball didn’t bounce, according to reports.

Liverpool arrived in Spain with a 2-0 aggregate advantage after getting the better of Unai Emery’s men at Anfield last week. But rain pelted the Estadio de la Ceramica pitch as storm warnings were announced by the Spanish governments.

According to ESPN, the officials were happy with the pitch ahead of the encounter. But the ball was behaving rather differently to how it usually would on a dry surface.

There were question marks over whether the game would go ahead as the heavens opened earlier in the day. And a video posted by talkSPORT journalist Declan McCarthy even showed rain leaking through the roof of the stadium, which soaked the concourse of the media area. But Liverpool will be desperate to complete the job they started on Merseyside in the first leg.

Liverpool are on course to land a historic quadruple after beating Chelsea to lift the Carabao Cup in February and booking their place in the FA Cup final, where they will once again meet the Blues. The Reds kept their Premier League title hopes alive at the weekend as they beat Newcastle at St James’ Park. And they are just one point behind leaders Manchester City with four games remaining.

Jurgen Klopp’s side reached the Champions League semi-final after winning their group and dispatching Inter Milan in the round of 16, before seeing off Benfica in the quarter-finals.