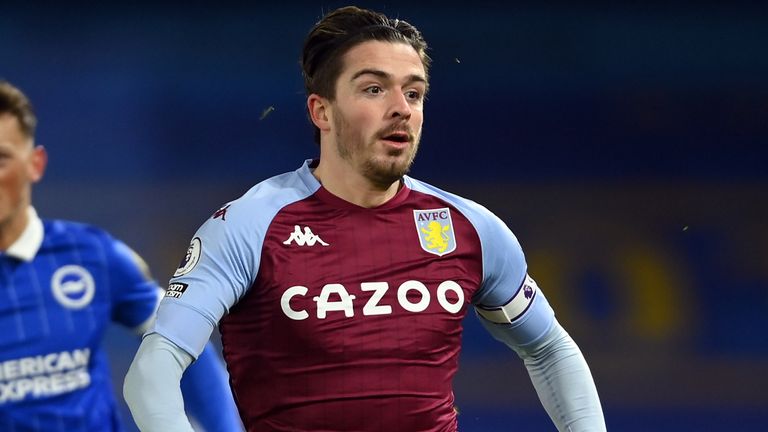 Team news, stats and prediction ahead of Aston Villa vs Fulham in the Premier League on Sunday (kick-off 4.30pm).

Jack Grealish will be available to face Fulham for Aston Villa after being out since February.

The skipper has been sidelined with a shin problem which has forced him to miss six games and England’s World Cup qualifiers.

Kortney Hause is back in training following a foot injury while Wesley (knee) is closing in on a return after 15 months out.

Fulham have no fresh injury concerns after all of their international players reported back in good health.

Captain Tom Cairney (knee) remains absent but Bobby Decordova-Reid could return after missing the last couple of games with a knock.

Manager Scott Parker will have a decision to make on whether to hand Aleksandar Mitrovic his first start in two months after the striker hit five goals in three games for Serbia.

Aston Villa vs Fulham will be shown live on Sky Sports Premier League and Main Event from 4pm; kick-off 4.30pm. Sky Sports customers can watch in-game clips in the live match blog on the Sky Sports website and app. Highlights will also be published on the Sky Sports digital platforms and the Sky Sports Football YouTube channel shortly after the final whistle.

Aston Villa are probably going to have to do something they’ve not managed in the last 10 games to win this one: and that’s score two or more goals in a game of football. Fulham, despite losing three of their last four matches, are a dangerous team in transition in forward areas and are likely to find the net at Villa Park. I’m happy to swerve a home win here. Villa just aren’t the Villa from earlier in the season that almost convinced me to back them for a top-four finish.

Dean Smith’s side have scored only six goals in their last 10 Premier League games – a statistic that will be argued by the unavailability of Jack Grealish for seven of those matches. However, he’s unlikely to be back at full Grealish throttle for this one having missed over a month of action. Plus, he’s coming up against a Fulham side that have kept four clean sheets in their last six away games, conceding only three goals. Scott Parker has built a team capable of playing without fear, racking up an run of eight games unbeaten on the road.

Goals do remain a problem but Fulham have the biggest difference between expected goals (34.1) and goals scored (23) in the Premier League this season, highlighting an underperformance which may just correct itself between now and the end of the campaign. If it does, they’ll stay up.

A low-scoring, away win looks the play here at 5/1.

Pitch to Post Preview: Jamie Redknapp on Arsenal vs Liverpool; Plus how do Man City replace Aguero? And crunch time for Newcastle

In this week’s Pitch to Post Preview Podcast Sky Sports pundit Jamie Redknapp joins Peter Smith to look ahead to Saturday’s big clash between Arsenal and Liverpool. Could Jurgen Klopp’s side turn a frustrating season into a glorious one with a late top-four push and Champions League charge? Redknapp assesses their chances – and explains where they will have to strengthen in this summer’s transfer window.

We also hear from Sky Sports News’ Man City reporter Ben Ransom on life after Sergio Aguero at the Etihad Stadium and who Pep Guardiola and his recruitment team will target to replace the iconic Argentina ace.

Plus Sky Sports features writer Adam Bate examines Newcastle’s clash with Tottenham – two teams with lots still to play for during this run-in, and two managers who need a strong finish to the campaign.