Jack Grealish is in line to return for Aston Villa while James Rodriguez remains out for Everton along with Yerry Mina; watch Villa vs Everton live on Sky Sports Premier League and Main Event from 5pm – kick-off 6pm 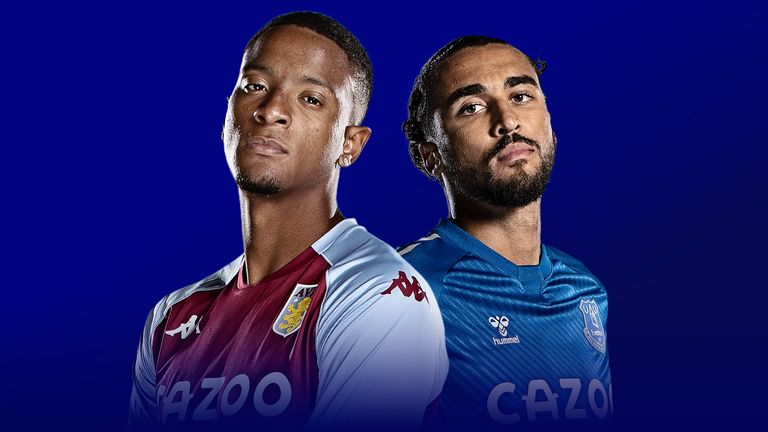 Team news, stats and prediction ahead of Aston Villa vs Everton in the Premier League on Thursday, live on Sky Sports (kick-off 6pm).

Aston Villa skipper Jack Grealish is poised to end his three-month injury lay-off. The England international could be on the bench for Thursday’s Premier League visit of Everton.

Grealish has been out since February with a shin problem and has missed 12 games – with Villa winning just three times in his absence to see their European hopes disappear.

Villa, who sit 11th, will be without the suspended Ollie Watkins for the first time in the league this season after he was sent off in Sunday’s 3-1 defeat to Manchester United.

Everton will be without James Rodriguez and Yerry Mina.

Playmaker Rodriguez has sat out the last two games due to injury after pulling out of the warm-up prior to the first of those, the 2-1 home loss to Villa on May 1.

Defender Mina came off just after the hour mark in Sunday’s 1-0 win at West Ham having felt a muscle problem, but Carlo Ancelotti hopes both will return against Sheffield United on Sunday.

Aston Villa vs Everton will be shown live on Sky Sports Premier League and Main Event from 5pm; kick-off 6pm. Sky Sports customers can watch in-game clips in the live match blog on the Sky Sports website and app. Highlights will also be published on the Sky Sports digital platforms and the Sky Sports Football YouTube channel shortly after the final whistle.

Everton are a tough watch but you can’t quibble with their defensive excellence once hitting the front. Carlo Ancelotti’s team have won every game away from Goodison Park when scoring the opening goal, therefore they have yet to drop any points from losing positions away from home. That was on full show in the gritty win over West Ham, who had 344 passes in the second half from 67 per cent possession but created next to nothing as the Everton back five, protected by Tom Davies and Allan, saw their job out.

It will be a similar approach at Villa Park. Sit, soak and hit on the break with Richarlison and Dominic Calvert-Lewin. And why not – only the two Manchester clubs have won more points on the road this season (36). I’m happy to play another low-scoring Everton win. They are a very short price though at 8/5 with Sky Bet. My eyes are drawn to the cards market instead.

Allan was terrier-like in the win at West Ham, making four tackles and picking up a booking for one of two cynical challenges. It’s his forte. He’s picked up seven yellows this season, including three in his last five. The 16/5 odds for another look generous.