Three points. That’s all that stands between Ange Postecoglou, Celtic, and an all-expenses-paid party with Snoop Dogg.

“This season they are back playing how we expect them to be and if they become champions I will fly over to Glasgow to party with the players,” the hip-hop legend, who has been a vocal Celtic fan since being gifted a jersey in 2005 by a local DJ on a visit to Glasgow, told Scotland’s Daily Record a few weeks ago. 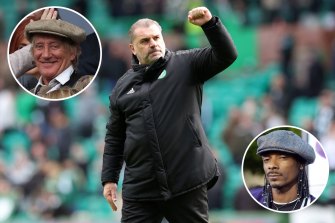 Ange Postecoglou is on the brink of winning his seventh major trophy as a coach.Credit:Getty

“The night in Glasgow will be on Snoop and you better believe if we are celebrating them being champions, it’s gonna be a hell of a night.”

Snoop’s generally a man of his word, so we’ll see what happens if Postecoglou’s Bhoys can knock off Hearts on Saturday night (AEST).

One more win will virtually seal the Scottish Premiership title: it will still be mathematically possible for second-placed Rangers to catch them in the final two games of the season (assuming they also keep winning), but they’d need to not only hope Celtic lose them both, but also make up their hefty goal difference buffer of +19 along the way. Even the most ardent Rangers supporter would concede it’s not happening, so a tall glass of gin and juice with Snoop Dogg surely beckons.

Postecoglou laughed off Snoop’s invitation when it was put to him by the Scottish press. “I know of him,” he said. “It’s not really my area of expertise, mate.” But that it’s even a possibility is a window into the exalted world that the former Socceroos coach now inhabits. 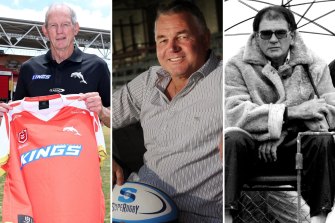 They doubted him at the start, but the 56-year-old is now universally loved by Celtic’s enormous fan base, which genuinely sits up there among the biggest in world sport and includes many other celebrity diehards such as singer Rod Stewart – who embraced Postecoglou after a recent win at Celtic Park. Supporters sing songs about him, they parade his face on their social media accounts like a badge of pride, some have even bought up the black cardigan he wears from the club shop to wear as a sartorial tribute.

The Scottish Premiership will be his sixth domestic league title, a run that began with two at his boyhood club, South Melbourne, in the semi-professional National Soccer League, two more at Brisbane Roar in the shiny new A-League – which included a remarkable 36-game unbeaten streak, a record across all of Australian sport, with a style of football that is equally without peer – and then another in Japan at Yokohama F. Marinos, where Postecoglou proved his methods were adaptable under different cultural conditions and despite the language barrier.

Those same methods are standing up in Glasgow, through the constant tension and turmoil of the Old Firm rivalry, despite all the predictions that Postecoglou might buckle in that unique environment. Yes, it’s true that Scotland’s is a two-team league; it’s been almost 40 years since someone other than Celtic or Rangers won it. But Postecoglou took over a broken shell of a club, which was 25 points adrift of the title last season, and has managed to rebuild it in his image at warp speed, turning them into (almost) champions again. No matter how you look at it, it’s a serious feat.

Then there’s the 2015 Asian Cup victory, which Postecoglou masterminded and, as the Socceroos regress, is an achievement that grows in significance with every passing year. Short of the World Cup, it is the most prestigious piece of silverware available to Australia on the international stage.

And that’s not to mention his status as a figure of symbolic importance – mostly in Australia, but now also in Japan and Scotland, where he has a growing number of evangelical followers. At a time of painful recession for domestic football in this country, when there are precious few male players in the world’s top leagues, Postecoglou has become a vessel for Australia’s lofty hopes and unrealised dreams.

Comparisons are odious, as the saying goes – but when it comes to sport, they can be pretty fun, so let’s just dive in. Who else can match the breadth and depth of Postecoglou’s achievements? Seven major trophies, along with a handful of minor ones, immediately put him at the pointy end of the conversation when it comes to team sports.

Many of the great coaches in AFL or rugby league, like Alastair Clarkson and Wayne Bennett, have won about as many premierships, but for obvious reasons have mostly done it in one country, or in some instances at the one club. Rod Macqueen won just about all there was to win in rugby union, including World Cup glory for the Wallabies, but in a sport not as widely played as football. One of his successors, Michael Cheika, unexpectedly led Australia to a World Cup final and is the only to man to lift both major club trophies in the northern and southern hemisphere. 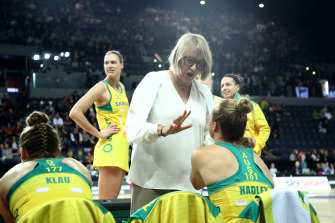 Lisa Alexander won more than 80 per cent of her matches in charge of the Diamonds.Credit:Getty

The Australian cricket team under John Buchanan was utterly dominant, however the role of the coach in that sport is far less significant. Former national netball coach Lisa Alexander, who has repeatedly expressed her desire to smash the AFL coaching glass ceiling, boasted a win record of 81 per cent over 102 matches with the Diamonds.

Postecoglou hasn’t had success at the very highest level – not in club football, anyway – but he has done things in the game that were long thought to be beyond the capability of Australians. The only real black marks on his record are his failures in continental club tournaments, where Brisbane and Yokohama both struggled to translate their domestic dominance in Asia, and the sour finish to his tenure as Socceroos coach, which still ended with him doing the job he was asked to do: sealing World Cup qualification. He’s still the only Aussie to have done it.

The point is not to downplay what others have accomplished – it’s an impossible debate, really – but to put Postecoglou’s career in the perspective in which it deserves to be seen. And at the very top level, his career really is only just beginning: with Celtic’s Scottish title will come automatic qualification into the group stage of the UEFA Champions League next season, another new frontier for Australian coaches. He may even face his Old Firm rivals on the biggest stage of all, with Rangers up against Eintracht Frankfurt in the final of the second-tier Europa League later this month.

Those close to Postecoglou expect him to end up in the English Premier League a few years from now, and if he continues at his current trajectory, it probably won’t be at a team battling relegation.

That’s probably the final destination. For now, though? Strap in, watch closely, and just enjoy the journey.

Watch football’s biggest superstars in the UEFA Champions League, UEFA Europa League and UEFA Europa Conference League on Stan Sport. Liverpool and Real Madrid do battle on May 29 (AEST) in the biggest game of all after Frankfurt and Rangers contest the Europa League decider (May 19) and Roma v Feyenoord decide the Conference League (May 26) – all matches streaming ad-free, live and on demand only on Stan Sport.