Arsenal look to be gearing up for a busy summer transfer window as Mikel Arteta prepares to lead a large-scale overhaul of his playing squad ahead of next season. A number of top-class performers have been linked with the Gunners as of late, including Manchester City pair Raheem Sterling and Riyad Mahrez, with their presence able to amplify the north London club’s attacking threat and provide a much-needed cutting edge at the top of the pitch.

Express Sport takes a look at the Arsenal side that could take to the Emirates Stadium pitch next season if Arteta manages to land not one or two, but five of his reported targets in the coming months.

Bernd Leno will likely take up his usual role between the sticks unless Arsenal manage to find an upgrade on the German stopper in the summer window.

He has been tipped to leave the club ahead of the new campaign, with football.london claiming that he will be sold if the right offer comes in for his services.

However, Leno underlined his commitment to the Gunners earlier this month, suggesting that he will look to stay and fight for his place in the side.

“I am still happy at Arsenal, Arsenal is still a big club, a big name in the world and in the Premier League,” he told Sky Sports. 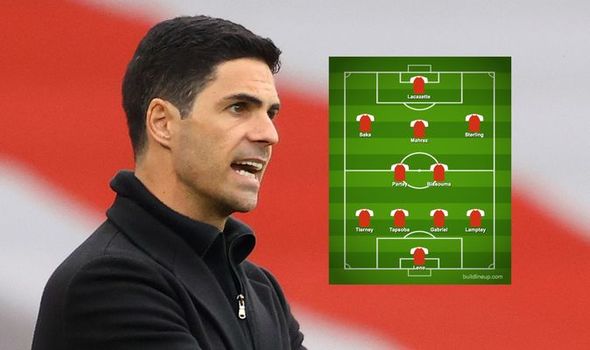 Arsenal’s back four appears to be an area in need of improvement this summer, with the addition of a new right-back believed to be an overwhelming priority for Arteta and club director Edu.

Hector Bellerin’s future at the club is far from certain and a viable replacement could arrive in the form of Brighton and Hove Albion’s Tariq Lamptey, with the Gunners reportedly keeping tabs on the 20-year-old with a keen interest.

Bayer Leverkusen’s Edmond Tapsoba is also said to be on Arteta’s radar as the Spaniard seeks a long-term replacement for David Luiz at the back.

However, a move for his signature is unlikely to come cheap, with the Bundesliga side understood to be demanding around £60million in order to part ways with their star man. 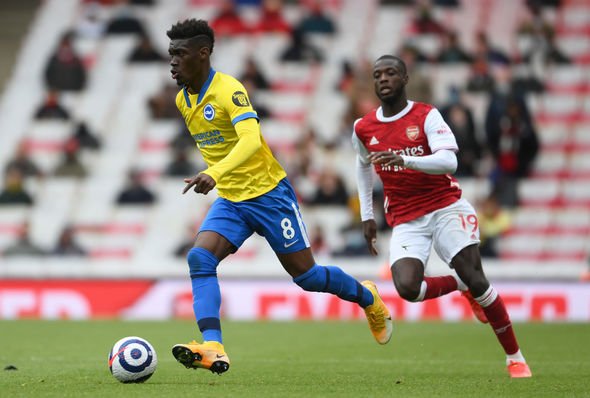 Thomas Partey failed to set the world alight during his first season at Arsenal, but could be allowed to thrive in his role as an enforcer alongside Lamptey’s Brighton team-mate Yves Bissouma.

The Mali international is said to be a target for the Gunners after proving his capabilities with the Seagulls, catching the eye with his cultured range of passing and consistent ability to work around a high press.

Meanwhile, Mahrez could assume the No 10 role if Edu fails to tempt Real Madrid into selling Martin Odegaard.

The Algeria international is primarily a winger but is more than capable of pulling the strings as an attacking midfielder, with his flair and creativity promising to address Arsenal’s lack of bite with the ball at feet. 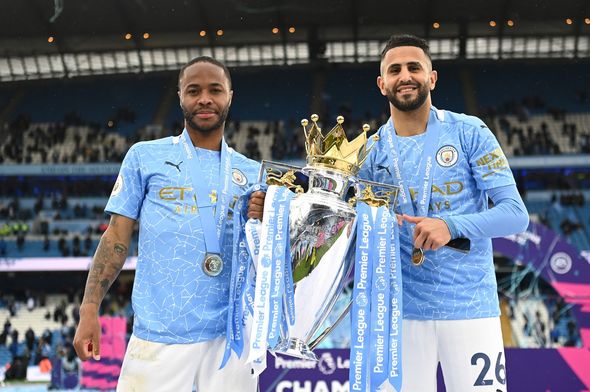 Raheem Sterling has been heavily criticised this season for his perceived lack of an end product, but the England winger is still a fantastic operator with the ability to lead trophy-winning campaigns from the front.

A move away from the Etihad Stadium could be exactly what he needs to silence the doubters, with an Arsenal switch able to provide him with a fresh opportunity to be the main man rather than just one good player in a team full of stars.

He could be tasked with holding down the right wing, with Bukayo Saka retaining his spot on the opposite flank, while Alexandre Lacazette is likely to lead the line if he stays for another season at least.

However, the Frenchman will be out of contract at the end of the campaign, so it would not be too much of a surprise to see Pierre-Emerick Aubameyang or another new signing take up the attacking burden.