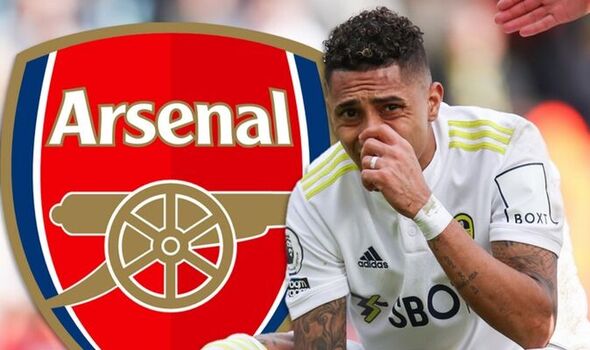 Arsenal’s cagey 2-1 victory over relegation-battling Leeds may be worth more than three points at the end of the season. Not only could it prove crucial in the race for Champions League football but the result also saw the Whites fall into the drop zone following Everton’s 2-1 win on the road at Leicester.

Jesse Marsch’s side are now fighting to keep their heads above water – despite being level on points with Burnley – with just three matches to go.

And should Leeds fail to preserve their top-flight status, there could be damaging implications for the current squad.

Elland Road chiefs would be well within their rights to demand a premium for winger Raphinha this summer if they are to secure safety.

The dazzling Brazilian has already made huge strides to be part of the Selecao’s World Cup squad in Qatar with a series of excellent performances for the national side.

He has also been one of few shining lights for Leeds in the Premier League this season, scoring 10 goals and registering three assists.

But if the Whites are relegated to the Championship, Raphinha could leave for just £25million due to a relegation clause in his contract.

That’s why the defeat to Arsenal was of huge significance – for more reasons than one.

Leeds knew they were involved in the dogfight but there was belief Marsch had steered them away from danger after an impressive start to his tenure.

However, a poor run of form and the resurgence of Everton and Burnley has seen Leeds dragged right back into the mire.

Arsenal are understood to be one of the teams interested in signing Raphinha this summer – particularly if his price tag is slashed so drastically.

Speaking on the Here We Go Podcast, Fabrizio Romano recently confirmed Arsenal’s interest in the player.

“I can tell you that Arsenal also ask for information about Raphinha of Leeds,” Romano said.

“They are not leading the race. They are looking for that kind of player.

Arsenal’s victory could go a long way to helping them secure a cut-price deal for Raphinha come the end of the season, however harsh on Leeds.

Edu is well-connected with agents in his homeland and Raphinha is represented by former Chelsea and Barcelona attacking midfielder Deco.

Problematically though for Arsenal, Barca are seriously keen on closing a deal for the former Rennes and Sporting man, meaning the Gunners will have to act quickly if they are to win the race for his services.