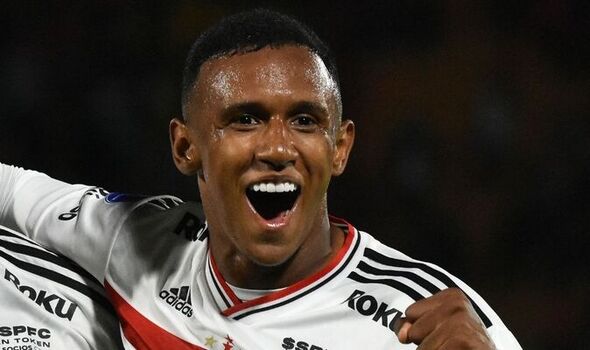 Sao Paulo winger Marquinhos is set to become Arsenal’s first summer signing with the Brazilian teenager now in London to undergo a medical. The 19-year-old forward was at the Gunners’ London Colney training ground on Thursday to meet Mikel Arteta and his new team-mates ahead of a £3million switch, which was verbally agreed between the two clubs last week.

Marquinhos was left out of the Sao Paulo squad to face Cuiaba last Sunday before receiving the green light to fly to England with his agent to put the finishing touches on his dream move to the Premier League.

The former Brazil Under-16 and Under-17 international is expected to return to South America before linking up with Arteta’s squad for pre-season later this summer.

Arsenal are now expected to confirm the capture of Marquinhos in the coming days and an announcement could arrive as soon as Friday evening.

The right-winger, who can also play on the left flank, will not be available until next season and will therefore play no part in Sunday’s final Premier League fixture against Everton, although he could yet be present in the stands.

Express Sport understands Sao Paulo failed to agree a sell-on clause with Arsenal for the player, despite insisting on a small cut of any figure received through a future sale.

Furthermore, sources suggest the thinking behind the deal is that the youngster will be a squad/development player and certainly one for the future.

Although nothing has been decided as of yet, the new signing could be set for a European loan next season to help ease his transition from South America football.

Marquinhos is set to sign a five-year contract that will run until the summer of 2027.

Edu Gaspar has been central to negotiations with both the player’s representatives and Sao Paulo.