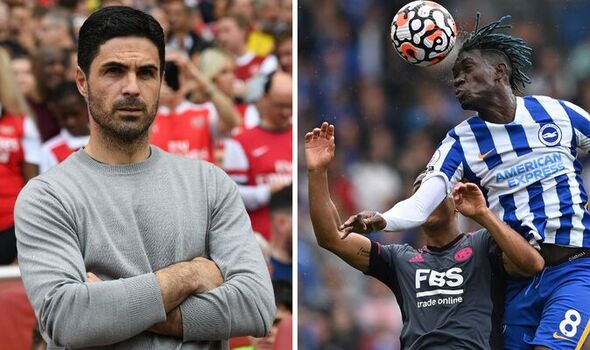 Arsenal remain confident and ‘on course’ to complete the signing of Youri Tielemans following Tottenham’s deal to buy Yves Bissouma from Brighton. Spurs continued their transfer hot-streak by finalising an agreement for the Mali international midfielder with the Seagulls on Tuesday morning worth an estimated £25million.

The development has created some frustration amongst Arsenal’s fan base with many of the opinion that Mikel Arteta should have beaten Tottenham to a deal.

Instead, Arsenal appear happy to let Gunners fan Bissouma join their north London rivals as they continue to work on other targets.

According to CBS Sports Ben Jacobs, Spurs’ move for Bissouma will only help bolster Arsenal’s chances of landing Tielemans.

He tweeted: “Arsenal remain confident and on course to sign Youri Tielemans before the month is out. Interest from Tottenham was never too advanced.

“But Bissouma’s incoming arrival will allay fears Spurs could hijack the deal. Tielemans is one of Arteta’s top priorities.”

Arsenal remain in background discussions for the Belgian, who has been on their radar for well over a year.

His dwindling Leicester City contract also makes him a more attractive, realistic option as he targets an exit from the King Power Stadium.

Tielemans is about to enter the final 12 months of his Foxes deal and Leicester are keen to move him on in order to raise some funds.

His representatives visited London Colney to meet with Edu back in January, when a move began to gather some pace.

But so far, Arsenal are yet to firm up their interest with a formal offer.

It was feared Tottenham were also in the running although they are now expected to pursue alternative targets in other areas after landing their new midfielder in Bissouma.

Tielemans would prefer to play Champions League football but it’s no longer essential.

Arsenal were fearful that their failure to secure fourth could prove costly in their pursuit of transfer targets.

Yet there is still optimism that both Gabriel Jesus and Tielemans will still be open to signing for the Gunners before the start of the 2022/23 season.

Edu will have to up the ante if he wants to maximise Arsenal’s chances of making the top-four next season as fellow rivals continue to strengthen.

The sales of Lucas Torreira, Hector Bellerin, Bernd Leno and Ainsley Maitland-Niles are expected to bolster the club’s transfer budget.