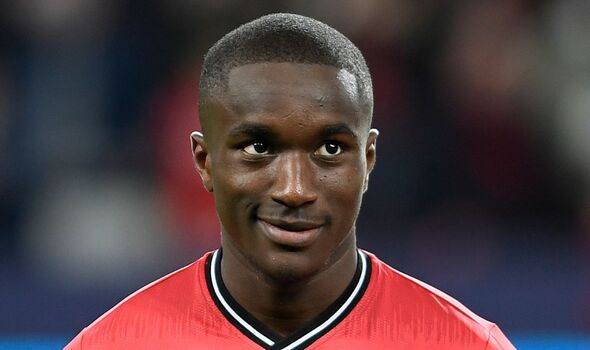 Arsenal are already facing difficulty in their quest to sign a winger following Chelsea’s dramatic £88million capture of Mykhaylo Mudryk. The Gunners were left to lick their wounds on Saturday after the Blues snuck in to snatch the Ukrainian winger – blowing their London rivals out of the water with a monstrous offer that Arsenal were simply not prepared to match.

Now Edu and Mikel Arteta have been forced to move onto other targets and one name that is of interest to the Emirates Stadium hierarchy is Bayer Leverkusen’s Moussa Diaby.

The Frenchman was among a list of players tracked in the summer by Arsenal but the Premier League leaders never formalised their interest.

But that could now change as they seek to add more quality to their squad to maximise their chances of winning their first title since The Invincibles made history in 2004.

Problematically though, Leverkusen know Arsenal have the cash after they made three sizable bids for their former target Mudryk.

They now know Arsenal have the cash at hand and will therefore use Mudryk as the benchmark in any potential discussions over the sale of Diaby.

Leverkusen do not want to sell their talented attacker anyway but even if they were prepared to listen to offers, they would demand stupid money.

There’s a sense Arsenal could now have already priced themselves out of a deal with Leverkusen anticipated to play hardball should formal club-to-club discussions take place.

The Bundesliga side will likely ask for £70million plus for the 23-year-old, who has attracted admirers at Arsenal following his performances in Germany and in the Champions League.

Even from the player’s perspective, Diaby has aspirations of forcing his way into the France starting XI and that is something he seems unlikely to achieve with Arsenal.

Bukayo Saka is always going to start ahead of him and Diaby is of a similar profile – left-footed but favours playing on the right-wing and cutting inside.

Had the ex-Paris Saint-Germain starlet been struggling of late, Arsenal could have negotiated a fair and competitive price.

But Diaby has five goals in his last five games under Xabi Alonso and that will only encourage Leverkusen to drive up his price tag ahead of a potential approach.

Arsenal will have other targets in mind, however and it’s hardly certain that Diaby is their next man in focus after they were stung by Chelsea for Mudryk.

Last summer, Raphinha was the subject of official bids from Arsenal before his move to Barcelona and there is a sense he could be available to leave Barcelona at the right price.

A move for Raphinha seems unlikely though at this stage with the player keen to remain at Camp Nou. Barca are also likely to demand up to £100m for his services.