Arsenal went ahead twice in a pulsating first half at Stamford Bridge thanks to Nketiah – who pounced on a weak back pass by Andreas Christensen – and Emile Smith-Rowe, only to be pegged back by equalisers from Timo Werner and Cesar Azpilicueta.

Nketiah restored the visitors’ lead in the 57th minute when he seized on another mix-up in Chelsea’s defence to make it 3-2, stabbing the ball home after Thiago Silva’s interception bounced into his path off Malang Sarr.

Bukayo Saka rounded off the win when he converted a penalty in the 92nd minute after he was adjudged to have been fouled by Azpilicueta.

The win left Arsenal just outside the Champions League qualifying positions in fifth place but level with Spurs on 57 points and only behind them on goal difference.

Chelsea stayed in third place on 62 points having played a game less than both Spurs and Arsenal and still looking on course for their own Champions League spot next season. 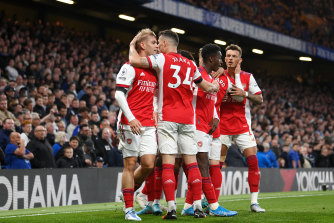 Elsewhere, Richarlison scored an equaliser in the second minute of stoppage time as Everton drew 1-1 with Leicester to move four points clear of the relegation zone.

Harvey Barnes’ fifth-minute goal looked set to win the game for Leicester and leave Everton in the sights of third-to-last Burnley, who play Southampton on Thursday.

But in Everton’s final attack at Goodison Park, the ball reached Richarlison via Dele Alli and Salomon Rondon, and the Brazil international converted the chance.

Goodison Park continues to be something of a stronghold for Everton under Frank Lampard, with the team only losing two of its last eight games there. 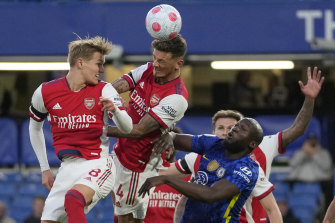 Burnley can still move to within a point of Everton by beating Southampton.

Leicester’s priority is Europe in the final few weeks of the season, with the team progressing to the semi-finals of the Europa Conference League. Still, Brendan Rodgers fielded a full-strength line-up against Everton and their front three combined for the goal.

James Maddison crossed from the right, Kelechi Iheanacho got the faintest touch that was deflected out to Barnes, and the winger turned the ball home from the edge of the six-yard box.

Newcastle, themselves threatened with relegation not that long ago, moved to within striking distance of the top half of the table with a 1-0 win over Crystal Palace while Manchester City took back pole position thanks to three second-half goals at home to Brighton.