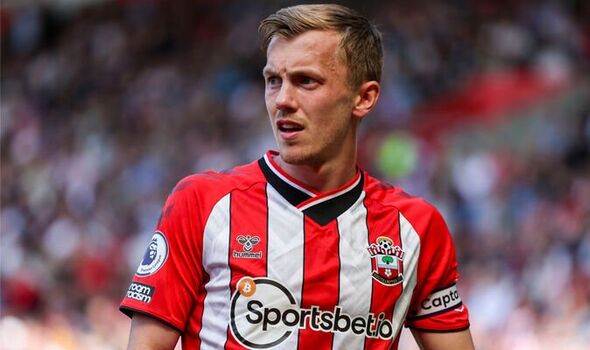 Arsenal, Tottenham and Newcastle have been told that Southampton midfielder James Ward-Prowse is not for sale this summer in a dent to their transfer hopes, according to reports. All three clubs have been credited with an interest in the set-piece expert but will need to look elsewhere for midfield reinforcements.

Ward-Prowse has enjoyed an excellent campaign for the Saints, scoring 10 goals in all competitions. A wonderful free kick against Brighton took him within four of David Beckham’s Premier League record of goals scored from dead balls – with the 27-year-old claiming the 14th of his career.

While Ward-Prowse’s set-pieces have been a key component in Southampton’s season, his all-round game has earned plenty of plaudits. The England international has been linked with a departure from the club with whom he has spent his entire career.

North London rivals Arsenal and Spurs have been linked with Ward-Prowse, while Newcastle could continue their heavy spending by completing a coup for the ace. However, the Premier League trio will apparently face a hardball line from Southampton in any transfer approach.

JUST IN: Ronaldo sends message to Man Utd fans after boycott vs Chelsea

According to the Daily Mail, Southampton are not willing to sell their captain. Ralph Hasenhuttl’s side are hoping to build on a positive season that sees them 13th in the top-flight.

The stance is unlikely to deter interested parties from making enquiries, though. Spurs are interested in signing a new midfielder, while Newcastle have plenty of spending power.

And Arsenal have been told to sign Ward-Prowse in the summer to bolster Mikel Arteta’s options. Former Premier League striker Charlie Austin – who played with Ward-Prowse for Southampton – told talkSPORT: “When I was there with him he played a little bit second fiddle to (Victor) Wanyama, to Pierre-Emile Hojbjerg, Jordy Clasie, Oriol Romeu, Steven Davis. Maybe just took his time.

“And then over the last two years he’s been club captain, he’s cemented himself in there. But certainly now I think it’s time to leave. This is why – because I think if he wants to go to a World Cup, he needs to be at a different football club than what Southampton are offering, or the way they’re performing. I just think he’s more appealing if he’s at a different club.”

“I do think he’d fit in at an Arsenal, or a Leicester, or Newcastle. Newcastle are on a rebuild, the way they’re going. It wouldn’t surprise me if they threw the dice at him.”