Armenia defender Arman Hovhannisyan somehow avoided a red card during their 2-0 defeat against Scotland despite launching a water bottle towards a linesman.

Anthony Ralston fired Scotland in front at Hampden Park by heading home from Stuart Armstrong’s cross after 28 minutes, before Scott McKenna produced a header of his own 12 minutes later to double their lead.

And before the interval McKenna almost made it 3-0 for the hosts when he swept the ball into an empty net, much to the frustration of Armenia players. 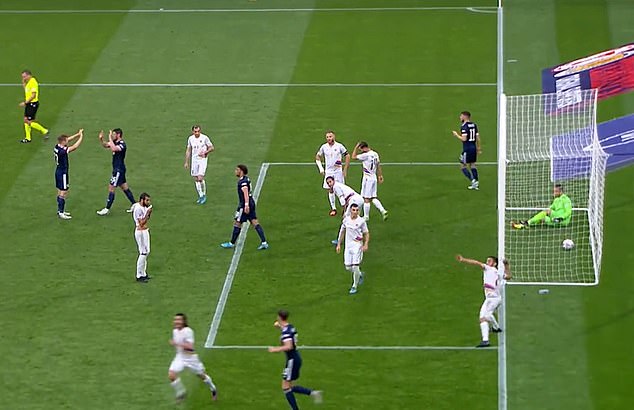 The visitors were left protesting what they clearly felt was an offside, yet referee Sebastian Gishamer and his fellow officials initially ignored their complaints.

This was when Hovhannisyan appeared to pick up a bottle on the byline and lob it towards one of the linesmen in fury at the decision to award the goal.

In the end, consultation with VAR showed that McKenna was in fact marginally offside when converting what he felt was his second and Scotland’s third of the evening.

Despite the video technology being in use, though, Hovhannisyan escaped punishment for his bottle throw in the direction of a linesman – not even picking up a yellow card over the incident. 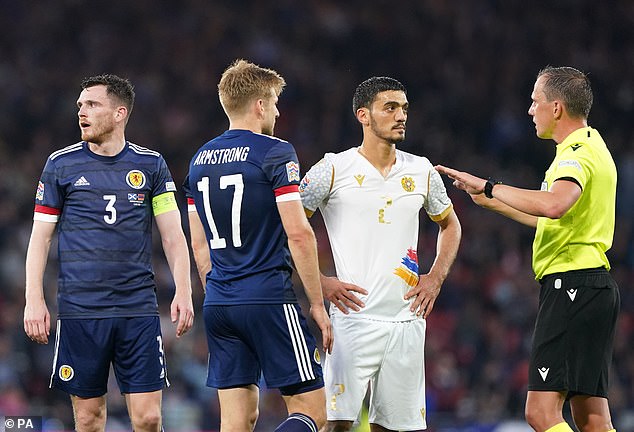 Scotland’s John McGinn could be seen urging the referee to take action after spotting the throw himself, but Gishamer chose not to do so.

Pundit and former Scotland striker James McFadden could not believe what he had seen, saying on Premier Sports: ‘To pick a bottle up, and even think about throwing at an official, and to get away with it; incredible.

‘We have VAR, they have cameras everywhere, they should be looking at that.’

Alan Hutton concurred with his co-pundit, adding: ‘That’s in the direction of the linesman, that’s terrible. You should be punished for that.’

It remains to be seen whether Hovhannisyan is punished retrospectively, but Scotland will not be fussed after seeing out 2-0 victory.

Steve Clarke’s men bounced back in perfect fashion after their World Cup heartache against Ukraine and will now look to build on that momentum against Ireland on Saturday. 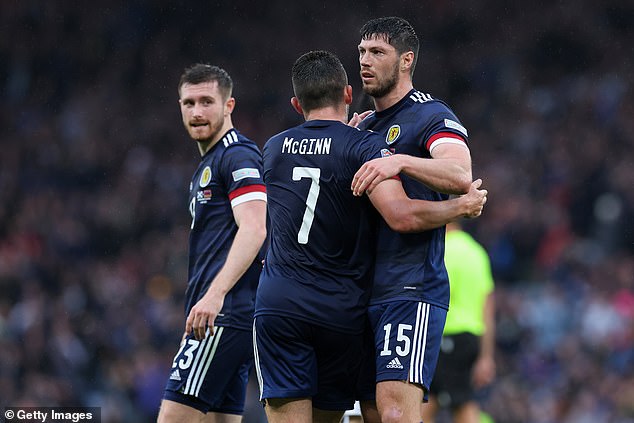