That’s a lesson that needs to be constantly reinforced because we are frequently invited to think that elite Super Rugby games are ‘Test-like’ in intensity and quality.

But watch the Blues-Crusaders Super Rugby final and any recent All Blacks-Ireland Test back-to-back and you will be reminded of the gulf.

That has to be the starting point for any discussion about coaches who want to make the leap from Super Rugby to Test rugby, even for one such as the evidently talented Scott Robertson of the Crusaders.

The man known as ‘Razor’ has been stunningly successful at both the Crusaders and Canterbury, collecting titles at a remarkable rate. 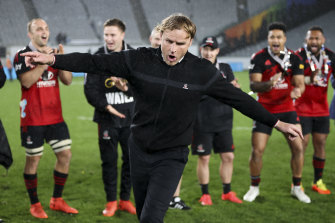 But those days are coming to a close. Robertson has been telling all and sundry that his next job will be at Test level, and it won’t be at the All Blacks if he isn’t wanted by New Zealand Rugby.

The temptation here for Rugby Australia is obvious. The Wallabies may need a new coach after the Rugby World Cup, and the surf-loving Robertson wants a job. It’s easy to see him kicking back at Manly, with RA taunting their New Zealand opposites about the world-class coach they let slip through their fingers.

But, caution is required.

Partly, that’s due to the gap between Super Rugby and Test rugby, as described above, but it’s also due to timing, the unique demands of the Australian landscape and of course, the presence of a number of Australian coaches who could do the job.

The latter point is important. Normally, any hint of ‘Aussie-first’ rhetoric makes me reach for the vomit bag, and I believe Dave Rennie was the right choice for the Wallabies job.

But there is an undeniable appeal of having an Australian voice at the Wallabies – if they are good enough – and this was reinforced by Eddie Jones’ recent time in Australia with England.

Some of what Jones says can be left to go through to the keeper, but I thought his thoughts on rugby’s diminished stature in Australia were accurate – bordering on poignant. Even though he is on the RFU’s payroll, he clearly did his best to elevate the Wallabies-England series with his media appearances. No wonder the ‘traitor’ slur provoked such a response. The bloke had been out there batting for Australian rugby for the previous three weeks.

It was a reminder of the value of a uniquely Australian voice and perspective, and actually brought me back to Dan McKellar’s post-game comments following the Brumbies’ loss to the Blues in the Super Rugby Pacific.

Now, McKellar isn’t in the same class of Jones in terms of media sprays, but he had a red-hot go at the officials, challenged the Kiwi journalists and stood up for his side. Part of me wondered if he should have kept his counsel, but another part admired him. He’s got a knockabout quality, an edge, that tells me with a bit of finessing he could be a real advocate for Australian rugby in general if he has the Wallabies platform.

He’s not the only one either. Jason Gilmore did a brilliant job with Australia A in the Pacific Nations Cup – they were clearly tight as a unit and tactically flexible. Darren Coleman did wonders at the Waratahs. Stephen Larkham is coming back from his Munster stint.

Don’t get me wrong about Robertson. His Midas touch with rugby players is likely to be transferable. As a player it is well documented that he spent time in France, and before his career really kicked off he enjoyed a spell in Northern Ireland. To this day he can pick an Ulster accent – it’s a great ice-breaker and shows the level of emotional intelligence. He knows how to connect to people.

But, if you were to ask me what the Wallabies need post-Rennie, I would say that a sense of Australian-ness is important. Rennie’s replacement is already in the country.

Watch every match of The Rugby Championship on the Home of Rugby, Stan Sport. All streaming ad-free, live and on demand.