‘We thought he’d scored’: Why Rennie had front-row seats for THAT Gregan tackle

There were, at last count, about 150,000 people who say they were at the old 40,000-seat SFS on the night George Gregan made THAT tackle on Jeff Wilson to win the 1994 Bledisloe Cup.

And it turns out one of them was the man who will this year lead the Wallabies into the first midweek Bledisloe Cup clash since that famous night.

Attending the rebuilt Allianz Stadium on Thursday for a promo shoot, Wallabies coach Dave Rennie recounted how he’d been at the Gregan Tackle game (we’ll take his word for it) on a junket when he was a young publican in Upper Hutt.

“Dominion Breweries shouted four or five pubs, a couple of us, for a few days and they looked after us and it involved the midweek Test there,” Rennie said.

“We sat down right in the front at the (south-east) corner here, not too far from the try line. I didn’t think it would be great seats but as it turned out Jason Little scored after about 16 or 17 seconds down this end, and all the action was down this way.”

Rennie’s crew were in the opposite corner to Gregan’s tackle.

“So as New Zealanders we were all up in the air because we thought Jeff Wilson had scored in the far corner, and didn’t realise the ball had been knocked out. It was a hell of a game and it turned out to be a situation Goldie doesn’t like to be reminded of,” Rennie said.

Rennie says playing on a Thursday night in Melbourne on September 15 at Marvel Stadium won’t be too much of a disruption.

“We have played on a Tuesday and played on a Wednesday last year against the French so it’s nothing new really,” he said. 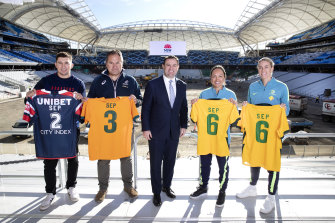 A potential clash between the Wallabies’ clash with the Springboks and the Shute Shield on September 3 has been avoided, with Rugby Australia now playing the Test match in the evening.

The Wallabies-Boks’ Test was confirmed as the second event at the new Allianz Stadium on Thursday. The Herald reported the preference of the host broadcaster Nine – owner of this masthead – was for the game to be an afternoon kickoff, to avoid clashing with NRL and AFL games that night.

That would have meant a clash with the Shute Shield decider, however, and talks were held between RA and the Sydney Rugby Union about moving the club grand final day to Sunday.

But Rugby Australia have opted to play the Test at night after all, and while it hasn’t been announced, ticket alerts have been sent out with the 7.30pm kick-off. That means the Shute Shield and other club deciders will be held at Leichhardt Oval as planned. The decision almost certainly means the Wallabies Test will be screened on one of Nine’s secondary channels, with NRL hard to budge from Nine’s line-up on the main channel.

Australian women’s sevens coach Tim Walsh would be willing to support any of the top sevens players making a switch to the Wallaroos for their World Cup campaign later this year, and has discussed it with Australian women’s coach Jay Tregonning.

The Wallaroos were on track to pull off an upset win over New Zealand earlier this week but just fell short. They will take part in the Women’s World Cup in New Zealand in October, a tournament where they have only made the semi-finals once from six attempts.

Asked if any sevens talent could make a late switch, Walsh told The Cauliflower: “I’m talking with Jay [Tregonning] and Rugby Australia. We’re stakeholders within a business. I’m very player-centric around being strategic in how we’re going to use each other and what the organisation needs.

“I reckon nearly every single one of those girls would be able to go and play and perform but if you’re not preparing within a team, it’s very hard to just drop in a player. I wouldn’t be doing that from a sevens point of view. Players, if they want to go and do it, then I’d like to support them.” 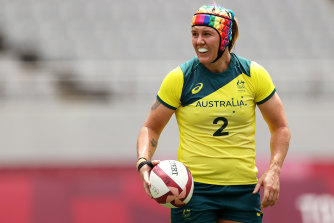 Walsh says Sharni Williams is the most likely to give it a crack. Williams has already played at three World Cups as a centre, in 2010, 2014 and 2017.

“I think she’d definitely be keen to,” Walsh said. “It’s for us to work out how we can make that happen.”

Reckon Dave Rennie is a fan of Charlie Gamble? Just ask him when he can get his hands on him for Wallabies selection.

“He will be eligible in April next year,” Rennie shot back when asked. 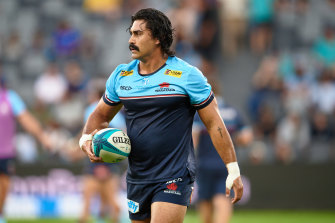 Charlie Gamble was a standout player for the Waratahs in 2022.Credit:Getty

“He has been outstanding, and outstanding both sides of the ball. He has definite presence post-tackle but he carries really well, too. He has been massive for the Waratahs, so we are well aware of him.”

There were no atrocities to report out of Mad Monday celebrations from the Reds and Waratahs. Unless you count the singing voice of former Wales international Jamie Roberts, who was captured belting Bruce Springsteen’s Dancing in the Dark with Harry Johnson-Holmes for patrons at the North Bondi Golf Club.

The next day the Waratahs boarded a boat in Sydney Harbour and let their hair down after a season they can be pleased with.

The most damage appeared to be done a few days earlier when Lachie Swinton played a round of golf with teammates not required for the quarter-final in Hamilton.

Up north, Lukhan Salakaia-Loto and Suliasi Vunivalu paid tribute to Josh Dugan and Blake Ferguson with a couple of pineapple cruisers in hand as they posed for a pic on a boat.

Watch every match of the Super Rugby Pacific on the Home of Rugby, Stan Sport. Semi-finals this week with Crusaders v Chiefs (Friday 5.05pm AEST) and Blues v Brumbies (Saturday 5.05pm) both streaming ad-free, live and on demand only on Stan Sport.