The NSW Waratahs are one loss away from equalling the longest run of defeats by an Australian team in Super Rugby history after slumping to defeat No.11 on Saturday.

The Waratahs also conceded their second highest number of points against the Crusaders in the 54-28 defeat in Wollongong. 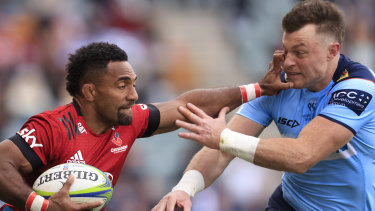 A half-time deficit of 26-9 became worse after the break as Crusaders captain Scott Barrett dived over for a five-pointer.

However, two NSW tries in the space of three minutes sparked hope of a miracle as the home side thundered back to 33-23 while running into the wind.

Jack Maddocks ran an excellent line to score near the posts before a slick back line build-up resulted in Izaia Perese bulldozing his way to the try line.

However, three converted tries from the Crusaders ensured the Waratahs remain winless in 2021.

The Waratahs’ leaky defence continued and from 11 matches this season the team, led by co-coaches Jason Gilmore and Chris Whitaker, have conceded an average of 41.6 points.

The Melbourne Rebels’ 12-match losing streak in 2011 and 2012, the worst run by an Australian team, is in danger of being eclipsed unless NSW can cause boilovers against the Highlanders and Chiefs in coming weeks.

While bookies wouldn’t even give a dollar profit from a $100 bet on the Crusaders, it was clear a one-sided affair was on the cards in Wollongong.

However, for the opening 35 minutes the Waratahs were never further away than a converted try and happy chipping away in multiples of three. They certainly could have been audacious and pushed for tries given penalties won’t win a game against the Crusaders. 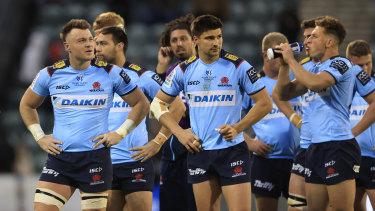 It was a familiar result for the Waratahs in Wollongong.Credit:Getty

Perese was immense for the Waratahs and will push for Wallabies honours later in the year.

Only the most faithful Waratahs fan believed their team, without a win from 10 starts, could overpower a brilliantly oiled Crusaders machine.

There have been glimpses of excellence this season. Scoring flashy tries wasn’t an issue against the Hurricanes, while Jake Gordon and Angus Bell’s stocks grew again in another big loss.

It was a similar story in an eight-tries-to-three defeat.

The visitors’ offloading game was sensational in the first half and they continued to pick holes in the Waratahs’ line. However, NSW, with nothing to lose, threw the ball around in the second 40 minutes, producing some enterprising set moves.

Wollongong has been a disappointing venue for the Waratahs, who lost 51-14 to the Chiefs last year in one of the last games before COVID-19 forced the world into lockdown.

Ben Donaldson came off with a groin injury in the 31st minute, while Harry Johnson-Holmes appeared to suffer a nasty head knock but was cleared to stay on the field. However, after a short stint, Johnson-Holmes was taken from the field by Rugby Australia chief medical officer Warren McDonald for a head injury assessment.