1. Three years in the making, Rennie-ball is bedding in.

Before the Test, Eddie Jones described the Wallabies’ attacking patterns as similar to New Zealand Super Rugby teams – a classic Jones backhanded compliment. There is an element of truth in it but Jones and England ended up being roasted by a key part of this attack plan: quick ruck ball.

When the Wallabies finally got their game going in the final quarter, the ball was clean and fast – probably under two seconds – orchestrated by the excellent Nic White and continued by Jake Gordon. And when the halfbacks needed to, they went three or four wide of the ruck to hit a big runner such as Samu Kerevi or Marika Koroibete – exactly how the All Blacks beat Ireland on Saturday. England couldn’t live with it.

The Wallabies got away with a wee James Slipper knock-on in the buildup to Jordan Petaia’s try but the attack and aggressive cleanouts seen in Perth would have been very close to the vision Rennie sold to RA when he was first appointed.

2. The key man in the Wallabies defence.

If the Wallabies have elements of New Zealand attack, then England play like every Australian rugby league team. They have an almost slavish adherence to “second man plays”, with Marcus Smith the deep-lying playmaker. However, where NRL wingers never fail to “bite”, coming off their flanks to create space out wide, the Wallabies’ backs were much more circumspect. 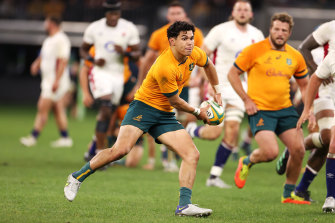 Noah Lolesio was among the Wallabies’ best.Credit:Getty

Because of the width of England’s shape, the key decision-maker in the Wallabies’ defensive line is actually the No.10, in this case Noah Lolesio, who often found himself in the space where England were trying to attack. In the first quarter alone, he was forced to make three decisions but looking at the positioning of his feet, at no point did he expect the ball to go anywhere but “out the back” to Smith.

In other words, England’s decoys were fooling no one. And, when Owen Farrell and Danny Care tried something similar, the halfback was nailed by Samu Kerevi. A major tactical win for the Wallabies.

3. England should drop a playmaker, and it shouldn’t be Farrell.

The understanding between Smith and Farrell isn’t close to what England enjoyed with Farrell and George Ford. Smith was disappointing on Saturday, and the stress of the occasion was clear in his body language. It’s hard to see how England would not be improved by going back to Farrell at No.10 and giving Smith the impact role.

Farrell’s flat pass to Tom Curry in the first half was a rare moment of England looking good on attack. It was odd to see Jones show such little faith in former Sydney University midfielder Guy Porter – an unused reserve – who could have changed the picture on attack with Farrell moving to No.10.

But this was a strange England performance in many ways, with the three backline reserves getting a total of eight minutes on the field, while star second-rower Maro Itoje looked completely out of sorts.

4. Kellaway can solve the No.15 question.

The Rebels player has long been the obvious solution at fullback – although his output on the wing last year was so good that the Wallabies were probably wary of moving him. But he was outstanding on Saturday. He’s deceptively strong, and his quick hands led to Jordan Petaia’s well-taken try.

Meanwhile, Marika Koroibete appears to have come back from Japan even fitter than he left. The No.11 was so good that if he continues in this vein, he won’t be the Japan-based Wallaby that has to make way for the return of Rory Arnold in the Rugby Championship. Suddenly, the unlucky Quade Cooper looks like the most vulnerable of that trio.

5. Fraser McReight stands out for Australia A.

The second-stringers will be kicking themselves for the loss to Manu Samoa in Fiji on Saturday afternoon. A lack of game time together cost them dearly at the scrum and lineout, although they still did enough to win the fixture. Ryan Lonergan was good at halfback but Reds No.7 McReight was the player of the game. He picked up two tries – the second really showcasing his pace – and was a constant presence at the breakdown.

In many ways it was a preview of Michael Hooper’s display in Perth, although Pete Samu’s superb cameo off the bench against England shows how hard it will be for McReight to crack the Wallabies’ match-day squad.

Cully's team of the week