The Wallabies are set to welcome back centre Len Ikitau and tighthead prop Allan Ala’alatoa, and could be boosted by NSW second-rower Jed Holloway, after calling in the cavalry ahead of Saturday’s decider against England at the Sydney Cricket Ground.

Ikitau and Ala’alatoa missed the second Test in Brisbane with a calf complaint and head injury respectively, but are back in the selection frame for this weekend.

Holloway, poised to make his Test debut in this series before falling to a minor calf injury, is also an outside chance. Wallabies staff were sizing him up on Monday before making a call.

They will be joined by exiled Reds second rower Lukhan Salakaia-Loto and NSW winger Mark Nawaqanitawase, who went into camp on the Gold Coast on Monday.

Second-rower Rory Arnold is likely to pay a visit to Wallabies camp this week, but is between seasons in France and Japan and is not likely to come into consideration until the Rugby Championship.

The returns of Ala’alatoa and Ikitau were good news for Dave Rennie, who is counting the cost of an attritional two Tests and training period over the past month. 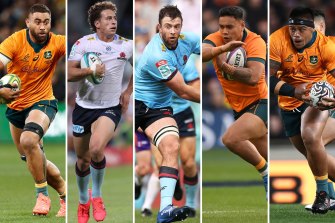 Eleven players have been ruled out for one or more Tests through injury, while Darcy Swain is serving a two-week suspension for foul play.

Quade Cooper (calf), Andrew Kellaway (hamstring), Ikitau (calf) and Holloway (calf) all picked up soft tissue injuries at training or in the pre-Test warm-up, in the case of Cooper. Ned Hanigan, called up from the Australia A squad ahead of the second Test, left again late last week for surgery on his knee in Sydney.

The most pressing selection issue is the second row, where Rennie has lost two starting locks in as many weeks.

Depening on his fitness, Holloway would ease the pressure in that area, but Rennie has to date taken a cautious approach to marginal calls, preferring not to jeopardise long-term selection.

He could move No.6 Rob Leota into the second row, with the Rebels enforcer having played there in Super Rugby, move Rob Valetini to No.6, start Pete Samu at No.8 and bring Reds back rower Harry Wilson on to the bench.

Starting Salakaia-Loto would be the straighter swap, requiring minimal disruption elsewhere, but the 30-Test Wallaby has been playing club rugby in the lead up to his departure for the UK Premiership and there was no guarantee what shape he was in.

Nawaqanitawase has been called up as cover in the outside backs. The 21-year-old played for Australia A in the opening two rounds of the Pacific Nations Cup and was recently selected in the men’s sevens squad for the Commonwealth Games, which kick off in Birmingham later this month. Nawaqanitawase played the house down for the Waratahs this year, scoring seven tries in his last nine Super Rugby games.

James O’Connor, Tom Wright and uncapped Reds excitement machine Suliasi Vunivalu are the last ones standing in the back three after the Wallabies lost three fullbacks in two weeks. Reece Hodge was called up from Australia A last week and could be looked to for a start at No.15, despite a strong performance there from Wright in Brisbane.

O’Connor has fallen short of his usual world class standards in two outings off the bench. He missed the last tackle on Henry Arundell in the first Test, and fluffed a kick for touch in the final quarter in Brisbane. It was emblematic of the Wallabies problems; they had the ascendancy but botched key moments, allowing England to close out the match.

Watch every match of the July Test Series on the Home of Rugby, Stan Sport. Kicks off this weekend with Wallabies v England (Saturday 7:15pm AEST), All Blacks v Ireland (Saturday 4:30pm AEST), South Africa v Wales (Sunday 12:55am AEST) and Argentina v Scotland (Sunday 5:05am AEST). All streaming ad-free, live and on demand only on Stan Sport.