‘Too much emotion for me to handle’: Waratahs rookie opens up on viral interview

Steve Edmed was standing on the Leichhardt Oval hill with his mates when son Tane charged hard at the Crusaders line, with flame red hair and the No.10 on his back. The hit-up led to the Waratahs’ first try a few seconds later.

“The boys said, ‘Hey, that looked just like you’,” Steve joked. “But forget me, mate, I am just happy for Tane and the Waratahs. It was a great night.”

When talking about an Edmed at Leichhardt Oval, for a long time you meant big Steve, the Balmain Tigers front-rower who ran hard at the line in orange and black.

On Saturday night, that all changed when 21-year-old Tane starred for the Waratahs at the famous inner west venue in an upset victory over the 12-time Super Rugby champions Crusaders.

Continuing his strong form since winning promotion to the Tahs’ starting team five weeks ago, Edmed helped steer the $15 outsiders to a season-defining win over the Crusaders, whose side contained eight All Blacks.

But Edmed’s emotional response was equally memorable. In a post-match interview on Stan that has since gone viral, Edmed held back tears as he tried to describe what it meant to beat the world’s best provincial team at a ground where he grew up watching, and playing, endless footy games. 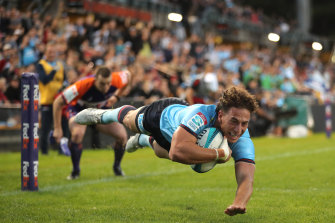 Mark Nawaqanitawase scores a try at a pumping Leichhardt Oval.Credit:Getty

“I have obviously grown up here my whole life, in this area,” Edmed said later, explaining the viral interview.

“My father played a lot of footy here and I played all my junior rugby league just down the road at Blackmore Oval. I probably kicked thousands of balls down at Leichhardt No.2. It was just a really good feeling driving up here and I had 30 friends and family in the stands, and to get a win like that with these boys … we had such a tough year last year. It was a bit too much emotion for me to handle.

“It has been such a tough road for these boys, and to get a win – and then for me to get a win like that in front of my friends and family, and on the field I have grown up playing on – it was just amazing. I was just a bit lost for words.”

The video earned him grief from his coach and teammates as the celebrations kicked on in the night, but the passion of Edmed was well-received by Waratahs fans, and non-fans, alike. The interview and the emotional celebration of the Waratahs players served as a window into the joy of a team re-discovering belief after a winless season last year, and conceded 53 points a game against Kiwi teams. 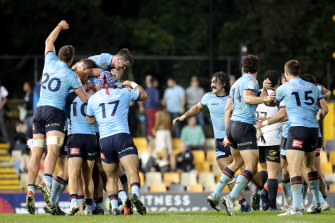 The Waratahs celebrate at full-time.Credit:Getty

“But we were all fighting them [tears] back. You just don’t know when the emotional victories are going to come,” Darren Coleman said.

“And that euphoria that you get straight after a final whistle in a game that you’re not sure you’re going to win or not, and you’ve worked bloody hard to win it, you should show emotion.”

The four points from an unexpected win should be enough to lock in a playoffs spot but it was equally valuable for Waratahs coach Darren Coleman in terms of growing optimism both for his young team and a returning fan base. The game drew a crowd of 10,293.

“We may not be perfect but we’ll keep fighting until the end… it was cool, even in the warm-up, just watching the crowd, I talk to these boys about it regularly, when people are lined up to come and watch you, it’s a good feeling,” Coleman said. 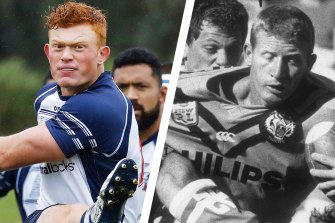 Edmed said the crowd was “amazing”.

“Especially after the year they had last year. For them to be rolling in in those numbers, I am just so glad we could put in a good performance for them,” he said.

Edmed couldn’t have been more at home if he was sitting on his couch. He grew up playing junior league for the Leichhardt Wanderers and was on contract with the Wests Tigers, but after impressing in rugby for Trinity Grammar, NSW and Rugby Australia’s ‘fighting fund’ pounced. His Trinity teammate and Souths halfback Lachlan Ilias was among Edmed’s support crew on Saturday night.

“It was great, I was really proud of him,” Steve Edmed said. “He works really hard. I don’t know anyone who works as hard as him, I am sure they’re out there. It has been a pretty tough couple of seasons for the Waratahs, and to get them across the line and being in that battle with the other two boys for the ten jersey, it all just came to the surface mate.”

Edmed’s form, and untapped potential, has put mountains of pressure on the Waratahs to re-sign the 21-year-old. At the start of the year he was third in line for the no.10 behind Ben Donaldson and Will Harrison but took his chance after injuries to both, and has not let go, with a robust run-kick-defend game honed in two seasons of Shute Shield for Eastwood.

Edmed is the only one off-contract, however, and the Force are very keen to lure him west. A long-term injury to Harrison and Edmed’s passion for his teammates would seem to the decision straight-forward but team sources say the Tahs’ salary cap is a headache.

“It’s a good change room to be in at the moment,” Edmed said.

“Last year wasn’t overly fun but I have heard it said many times, we stuck by each other. There wasn’t boys turning on each other. We stayed really, really tight. We all get along extremely well. We stayed extremely tight and it’s nice to see us get some results and the boys are really enjoying it.”

The Waratahs’ upset win wasn’t even the biggest rugby boilover in Sydney that day.

Earlier in the afternoon, the Western Sydney Two Blues registered their first win over the powerhouse Sydney University in 24 years with a 27-19 victory at Uni.

The victory came after the Two Blues had claimed the scalp of 2020 Premiers Gordon a week earlier, and only a year after the club feared it would have to fold due to a set of minimum criteria controversially proposed by other Sydney clubs for entry into the competition.

Penrith ended up leaving the SRU and joining the John I Dent Cup in Canberra but the Two Blues, who changed from name from Parramatta to Western Sydney, worked intensively with the SRU and NSWRU to rebuild the club. And that work is beginning to bear fruit, said Two Blues general manager Christian Burden.

“The message that we say is this is no fluke, it is all part of a plan and it’s all starting to fall into place,” Burden said.

“Everyone is pretty excited and happy about the result and the performance. Certainly the chat on social media is one of everyone being happy and recognising the hard work that has gone on, and that’s it starting to pay off.”

“We knew we hadn’t won in a long time and that came out after the game, but going in coming out of the Gordon game, the first thing we said to the boys was ‘it is important we back it up now’,” Burden said.

“Hopefully it sends a message in the club, and out of the club, that we are on track. First grade is your beacon and if they’re doing well hopefully that lifts the whole club.”