‘They know you haven’t won a game’: Newsome reveals toll of Tahs’ season

Winger Alex Newsome has revealed the full toll the Waratahs’ winless season is taking on the club’s players as NSW crawl to the finish line of an historically bad campaign.

The Waratahs’ loss to the Crusaders was their 11th straight. If they lose to the Highlanders at Forsyth Barr Stadium on Saturday afternoon, they will have equalled the worst losing streak of any Australian Super Rugby side. 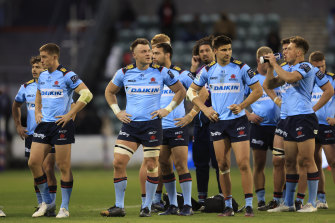 It was a familiar result for the Waratahs in Wollongong.Credit:Getty

“Obviously it’s been a shocker of a year but we’re looking to finish with two wins. And we’re fair dinkum about that.”

Every Monday feels like Groundhog Day at Daceyville. Every week, a new player is rolled out and asked to explain how the club continues to leak points in alarming fashion.

The Tahs have conceded almost 42 points per game through 11 matches this season.

Against their three New Zealand opponents in trans-Tasman Super Rugby, they have conceded 64, 48 and 54 points.

‘The boys are up and about late in the game but we’re letting each other down early in the match.’

It’s a trend which has led to many shameful reviews.

“Yeah, they’re embarrassing reviews. We have guys being accountable in review but it’s too late then. That’s what is disappointing,” Newsome said.

“The boys are up and about late in the game but we’re letting each other down early in the match.

“It’s hard to explain. You have to pay a bit of credit to the [Crusaders], who are obviously a champion side. Their shape is really efficient. We just need to work harder.

“I just think it’s about individuals working harder. Yeah, we have a good system but you look at some of the footage we looked at just then and as a collective, we’re not working hard enough off the ball.”

Newsome also believes his side must stop instinctively looking up to the New Zealand teams. The Waratahs can follow the lead of the Reds, who put a big margin on the Chiefs before being given a late scare.

“Mate, 100 per cent. We just have to stop putting all these Kiwi sides on a pedestal,” he said.

“Look at what the Reds did in that first half on Saturday night and what Izzy (Perese) has been doing to defences.

“When Australian sides are really confrontational and backing themselves, you can see what they can do.

“The first half by the Reds really showed the rest of the Aussie teams what we can do and obviously having the Chiefs in two weeks, we’re watching that closely.”

In rare positive news, new recruit Rahboni Warren-Vosayaco played 40 minutes for Southern Districts in Shute Shield on Saturday and is expected to make his Waratahs debut against the Highlanders.