Cardiff: Dave Rennie doesn’t have a lot to gain this weekend when the Wallabies take on Wales.

It’s been well documented that a Wallabies loss in Cardiff would consign the team to their worst calendar year since 1958, when 10 or more Tests have been played.

Looking beyond the prospect of a 10th loss from 14 matches in 2022, there’s another alarming statistic worth examining ahead of a showdown with Wales, who are also under intense scrutiny following a 13-12 loss to Georgia.

The Wallabies have a horror record when it comes to the final match of a calendar year.

Australia have not come up trumps in the final fixture of an international season since 2013.

It is undoubtedly the byproduct of a long international season, but there is no excuse for Australia’s insipid performances when a holiday is just around the corner.

Of course, losses in 2015 (New Zealand) and 2019 (England) occurred at World Cups, but the final fixtures of recent spring tours have been miserable affairs for the Wallabies.

In 2014, the Wallabies lost their last three matches of the year, signed off with a 26-17 defeat to England.

The concerning pattern continued in 2016, courtesy of a 37-21 loss to England, before the Wallabies dished up one of their worst performances in the Michael Cheika era the following year with a record 53-24 loss to Scotland in a game where Sekope Kepu was red-carded.

Then there was a draw against Argentina in 2020 and a one-point defeat to Wales this time last year. 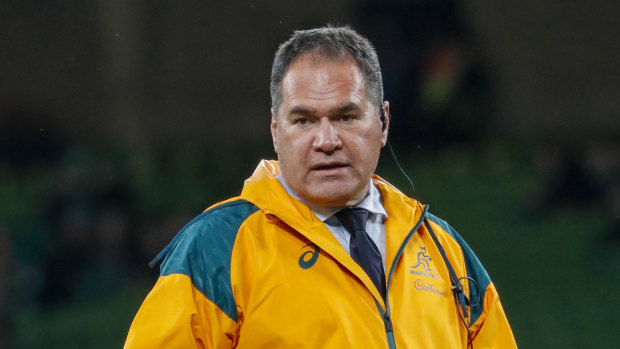 Excluding the 16-16 result against Argentina, the average margin of losses, in the final match of a calendar year since 2014, is 16.4 points.

The team is aware of their decline at the back-end of years and want to finish a taxing tour on a high following a three-point loss to Ireland.

“We’ve got another chance to light up on Saturday,” said Wallabies second-rower Nick Frost. “Not make amends, but have another crack. At the end of the day, it is rugby … the sun comes up. It’s disappointing but you go out there and you get another opportunity.”

However, it is a trend that will be difficult to reverse given Rugby Australia tacked on an extra game, outside the international window, for financial reasons.

A fifth Test in five weeks is brutal, particularly given the rising standard of Northern Hemisphere sides.

Rennie, who last week described himself as a glass half-full coach, may have seen the upside in getting a sense of how his team were positioned 10 months out from a World Cup.

But as far as form guides go, this game will offer next to nothing when looking ahead to the World Cup.

There is a huge number of Wallabies players who won’t face Wales. Just two of Australia’s starting XV from the 2021 Wales fixture — James Slipper and Len Ikitau — will be there this weekend.

More than 15 players who will seriously push for selection in Australia’s matchday 23 for a World Cup opener against Georgia in September won’t be in Cardiff.

In the front row, there’s a strong chance Angus Bell, Dave Porecki, Tolu Latu and Taniela Tupou will be in France, provided the latter can recover from a ruptured Achilles.

Behind them in the second row, Rory Arnold and Izack Rodda should feature.

Rennie will point to this when he meets RA officials after the tour, who are keen to understand why results haven’t gone the team’s way.

Only a disaster against Wales would open the possibility of Rennie being sacked before Christmas, but no decision will be made until a full-scale review is conducted.

A resounding win over Wales probably won’t be enough to get Rennie the contract extension, beyond 2023, that he is seeking.

Last year, after defeats to Scotland and England, Australia fell 29-28 to Wales. After the match, Rennie labelled the officiating “horrendous” and called on referees to be held to greater account.

Since that Wales fixture, the Wallabies have managed four wins from 13 matches. Nine of those Tests have been decided by eight points or fewer.

History shows games against Wales are always tight, with the last three decided by four points or fewer.

But as Australia have learned recently, prizes aren’t given out for getting close.

Watch all the action from the Wallabies Spring Tour with every match streaming ad-free, live and on demand on Stan Sport.