Rugby’s zealous on-field disciplinary system continued to confound Super Rugby fans after red and yellow cards in the space of 10 minutes hit Queensland in their 32-20 win over NSW on Saturday.

The Reds did well to concede only three points in the 10 minutes they were down to 13 men and found their footing to run away with the match thanks to three second-half tries to Taniela Tupou, Fraser McReight and Jock Campbell.

But a red card against prop Dane Zander for a dangerous tackle on Ruan Smith and a yellow against halfback Tate McDermott for a deliberate knockdown capped a bad run for the 15-man game, after red card debates marred the Six Nations in recent weeks.

Luckily for Australian and New Zealand audiences, Super Rugby rules allow a red card replacement after 20 minutes, an innovation in its third season and set to be used again in this year’s Rugby Championship.

But World Rugby officials have to date refused to give the rule variation a go in the northern hemisphere, worried a 20-minute replacement waters down the deterrent factor.

The result was a collective groan around Suncorp Stadium in Brisbane and most likely around the country, as the television match official wound and rewound play to show Zander’s left shoulder connect with Smith’s head. 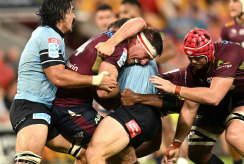 With scores locked at 10-10 after fullback Will Harrison slotted a penalty goal, it was set to be a decisive period, but Queensland ran into the sheds leading 13-10 and got down to business in the second half.

NSW coach Darren Coleman, watching from Sydney in COVID-19 close contact isolation, would have been furious his players could not capitalise on such an imbalance.

A try to halfback Jack Grant had promised a solid start for the unfavoured visitors, who lost prop Angus Bell as a late scratching and had to leave centre Izaia Perese at home with COVID. They were also missing five-eighth Ben Donaldson and halfback and regular captain Jake Gordon.

Grant’s try was a superb piece of heads-up rugby that saw the ball pass through five sets of hands under heavy cover defence before Grant ducked through for the five points.

Will Harrison converted to put the visitors out to a 7-0 lead before a James O’Connor penalty goal made it 7-3 in the 21st minute.

The Reds were in certain scoring positions twice in that period but solid scramble defence from NSW saved the points.

A pinpoint touchfinder from James O’Connor put the Reds back deep in NSW territory and Tate McDermott darted past three defenders from the back of a maul to score in the 28th minute, claiming a 10-7 lead after the conversion.

Play descended into chaos shortly after, with Zander’s send-off and McDermott’s sin-binning dominating the final 10 minutes of the half. Both sides kicked penalty goals to make it 13-10 at half-time.

The Waratahs did their best to strike while Queensland were down to 13, winger Mark Nawaqanitawase almost grounding it in the corner in the 42nd minute before he was flung into touch.

They settled for three points five minutes later, levelling the scores at 13-13, but it was Queensland who managed to break the deadlock, with Taniela Tupou picking up the ball and burrowing over from close to the line.

Tupou went agonisingly close for a second time, placing the ball just short of the white paint, but back-rower Fraser McReight finished the job in the next phase, making it 25-13.

Jock Campbell caught a Tane Edmed intercept and sprinted 65 metres to score the Reds their fourth try and an attacking bonus point, and newcomer Isaac Henry converted to end hopes of a NSW comeback.

Tom Horton scored in the 79th minute to make it a more respectable 32-20.