The 20-minute red card is dead, or at best on life support, after the World Rugby council rejected a recommendation to give the polarising experiment a global trial.

At the same meetings in Dublin last week that saw Australia rubber-stamped as host of the 2027 and 2029 World Cups, World Rugby’s powerbrokers voted on law changes for the next year.

As forecast, the locally-created 50:22 and goal-line drop outs were written into full law after popular trials, and new crackdowns on coaches acting as water runners were also announced, partly to shut down the pesky Rassie Erasmus.

But conspicuous in its absence from World Rugby was news about the red card replacement law or, as most know it, the 20-minute red card.

The law trial has been running for the past two years in the southern hemisphere and is popular; seen as a way to not ruin a game’s spectacle and, in tandem with a strong judiciary, ample punishment. But in the northern hemisphere, the 20-minute red card has been slammed as dangerous and, given red-carded teams are actually winning more than 60 per cent of Super Rugby games, not enough of a punishment to drive behavioural and coaching change.

The Law Review Group, which Dave Rennie sits on, recommended the 20-minute red card go to a full global trial but a spokesperson confirmed the World Rugby council had rejected it, citing player welfare concerns. 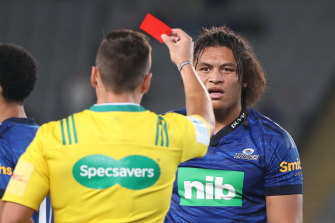 Will that mean a return to full red cards in Super Rugby and TRC at the end of the current trial in October?

We hear SANZAAR may apply to keep the trial going next season, arguing it could help provide more fulsome data and a better case for implementation. But long-term, there can’t be different laws forever – and attitudes appear pretty fixed in the north.

Standby for plenty of daytime Test rugby this winter. The Wallabies’ two Tests against the Springboks, in Adelaide (August 27) and Sydney (September 3), appear likely to be afternoon kick-offs.

The shift to day rugby is the preference of broadcaster Channel Nine – owner of this masthead – who want the Wallabies on their main channel and leading into evening NRL games, as opposed to a secondary channel at the same time. 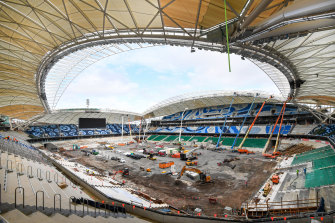 Allianz Stadium is set to host an afternoon Test between the Wallabies and the Springboks. Credit:Peter Rae

It would see the Wallabies play the first day-time game at the new Allianz Stadium, which opens the night before with the Roosters taking on the Rabbitohs.

But there is a tricky issue to resolve in the shape of a clash with the Shute Shield Grand Final, which scheduled a 3pm decider at Leichhardt Oval on September 3 many months ago.

Talks between the parties are ongoing but Sydney Rugby Union have already made it known they’re not interested in putting the Shute Shield grand final on as a Test curtain raiser, arguing they have a standalone, multi-game event that commands its own spotlight. Moving the club grand finals to Sunday looks to be the likely outcome but Leichhardt Oval is booked by the Wests Tigers that day, so a new venue is needed. North Sydney Oval is the short-priced favourite, but returning to Allianz Stadium has also been floated.

An emotional homecoming is on the cards for Eastwood’s Nic Dolly, who was named this week in Eddie Jones’ training squad ahead of England’s three-Test tour down under in July.

Dolly, dubbed ‘the human mullet’ by his Australian coach, is playing for Leicester Tigers in the Premiership after moving there as a teenager in 2017. A tough, self-made hooker, it’s no surprise he caught the eye of Jones, who gave him his first cap in the autumn.

Dolly was coached by Eastwood club great John Manenti, now coaching the Australian men’s sevens team, who was a fan and mentor from early on.

Back then, the Kenthurst-raised Marian Catholic College student sported a regulation crew cut.

“I had to push to get him eligible to play Colts as he was underage and needed dispensation,” Manenti said. “He was small then but was tough as. We discussed his going overseas as a learning opportunity, never could we have imagined what might end up happening. He’s an Eastwood junior and colt and we’re incredibly proud of him.”

If he is selected to tour in July, England can expect an extra loud contingent of fans at the Sydney Cricket Ground, cheering on the one who slipped through the cracks at home and beat his own path – to the highest levels – abroad.

The curious case of Salakaia-Loto

Have we seen the last of Lukhan Salakaia-Loto in Australian rugby?

It certainly looks that way after his name was missing from the Queensland Reds team sheet for their game against Moana Pasifika. 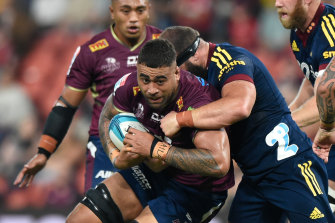 England-bound Lukhan Salakaia-Loto looks likely to have played his last game on these shores.Credit:Getty

The 30-Test Wallaby has already signed a contract to play in the Premiership with Northampton Saints next season, so is nearing the end of his time at the Reds.

Salakaia-Loto started against the Highlanders before being dropped to the bench for last week’s Blues match. Now he is out of the 23 altogether and at the pointy end of the year, it is a big call from Brad Thorn to leave out a player who played at the 2019 World Cup.

The Reds say Salakaia-Loto was dropped on form, with Connor Vest preferred for the bench. The 25-year-old was also left out the Wallabies squad in April.

“It’ll be sad to see Lukhan go, he’s done a great job over the years in the jersey,” Thorn said.

“Connor has taken every opportunity. You want those tough decisions.

“[Vest] is a good story. He was driving up [to Queensland]. He’d been with NSW in the pre-season and he was thinking about running his own building business at 27 years of age … thinking this is probably the finish. He gets a call from me on the drive up to NSW saying we’d like to be involved.”

Gilmore to lead Australia A

Former Junior Wallabies coach Jason Gilmore will serve as head coach of the Australia A team in a three-game Pacific Nations Cup series in Fiji in July.

As revealed earlier this month, Australia A will play the Test sides of Fiji, Tonga and Samoa at the same time the Wallabies are taking on England.

The Aussie A squad will be made up of the best of Super Rugby talent who don’t make the Wallabies squad, and there may be some squad members who are sent to play as well.

It is a coaching development tool, as well, so Gilmore will lead a coaching staff including other Super assistants, with Rod Seib (Brumbies), Michael Todd (Reds) and Geoff Parling (Rebels) filling out the staff.

Australia will play the USA, Canada and New Zealand in the inaugural series, which will be crucial for World Cup preparations. The Wallaroos have to get back on track after beating Fiji but losing to Japan earlier in the month.

“We learnt a lot from our first two Test matches of the year,” coach Jay Tregonning said in a statement.

“I know the side will strive for more consistency against three challenging opponents in the Pacific Four Series.”