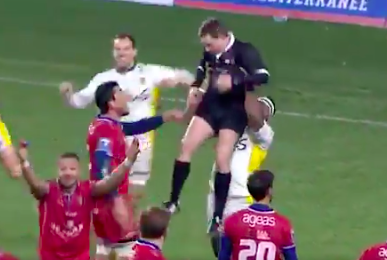 A player was sent off for picking up a referee during his interesting celebration in the Pro D2 on Friday evening.

Beziers welcomed Nevers to south France for their second tier match which saw the visitors leading 30-25 in the final moments.

When Nevers ultimately held on, their players were delighted – with Josaia Raisuqe in particular unable to contain his emotions.

The former-Stade Francais player picked the referee up and lifted him above his head and into the air.

Unfortunately for Raisuqe, referee Laurent Millotte did not see it for the light-hearted move that it was perhaps intended and promptly sent him off.

The red card was perhaps harsh given Raisuqe’s intentions and it ultimately ended his night on a sour note despite the impressive win for Nevers.

However, Millotte clearly did not appreciate being lifted up and in professional sports, a player cannot touch the referee – and rugby is a sport which prides itself on the respect between player and official.

Nevers head coach Xavier Pemeja was quick to denounce the celebration by Raisuqe as unacceptable.

He said to Canal+: “It’s intolerable. He’ll be punished by the league’s disciplinary committee.

“I’ll deal with him. I can’t accept it. What happened at the end there, it’s going to be very bad.”

The incident received mixed reactions online, with some fans finding the humorous side in Raisuqe’s actions while others were in complete shock.

This is not the first time that Raisuqe has been in the spotlight for the wrong reasons in his career, as the 26-year-old was sacked by Stade Francais in 2017 for “gross misconduct”.

The visitors still held on for the win and deserve the celebrations because they lie in sixth-place in the Pro D2 standings at the halfway point of the season, which would be enough to qualify for the play-offs.

Beziers remain in eighth place, trailing Nevers by four points after the defeat.