Waratahs coach Darren Coleman says he will take responsibility if the recruitment of Tolu Latu backfires but is confident the club’s culture, and the fact it is the hooker’s “last chance”, can produce a redemption story.

After months of talks, the Waratahs announced the signing of Latu on Monday on a one-year deal. The 19-cap Wallaby played with NSW between 2014 and 2019, and is a world-class hooker who was one of Australia’s best at the 2019 Rugby World Cup.

But given his chequered past, the deal required board approval and the contract carries strict conditions around behaviour. The 29-year-old was fined and suspended for drink-driving in Australia in 2019 and spoke about “feeling lucky” to have been given the chance to play at the Rugby World Cup. Latu was busted for a second drink-driving offence in France in 2021.

Latu’s on-field discipline has also been poor. He received seven yellow cards and two reds in three years at Stade Francais. The last red saw him cop an 11-week suspension for a reckless tackle and leave the club. Former Wallaby Phil Kearns said this month it would be a “massive risk” to bring Latu back.

But after gambles on Karmichael Hunt and Izzy Perese paid off handsomely, the Waratahs decided to give Latu a last shot. Coleman said he believed the hooker would add depth to a team already containing starting Wallabies hooker Dave Porecki.

“I take people as I find them and the two experiences I had with [Latu] in NRC were really positive,” Coleman told the Herald. “So I can’t hang a guy for something he hasn’t done while I am around. I would like to think we have some good influences here – and the team, culture-wise, is in a really positive space – and that he will get swept up in it. 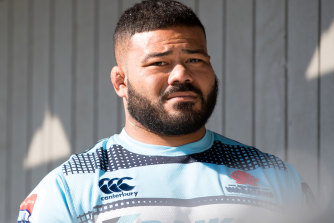 Latu will be on his last chance at the Waratahs.Credit:Janie Barrett

“Further to that, everyone knows it could be his last shot and his last chance. So you’d think all those things combined, we will get a positive reaction out of him. I have had a bunch of chats with him, five or six, over the last bit of time, even as late as last night. And he is saying all the right things.

“He hasn’t broken my trust so he is starting with a clean slate with me and I am confident I can get him on the right track. Time will tell. If it doesn’t work out, it is on me and on my head. I am prepared for that.”

Having been unsettled in France, Latu is back around support networks in Sydney and “in a good place mentally,” Coleman said.

“He is back home with his mum and he has learnt some lessons in his past. He is focused on contributing well for us, and all going well, maybe having another dabble at the Wallabies campaign,” Coleman said. 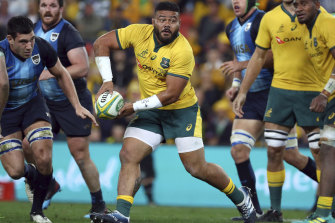 Tolu Latu playing for the Wallabies.Credit:AP

“I am a glass half-full guy. If he is positive and he is happy, then that will come through.”

Coleman has also brought Kurtley Beale back into the Waratahs fold after a French stint.

Asked whether it was a risk to put Latu on the field given his tendency to attract red and yellow cards, Coleman said the Waratahs coaching staff had plans to reduce the risk.

“He has always been a player who plays aggressively, and that’s good, but we have some really significant stuff in place, and some training stuff, around his tackling,” Coleman said. 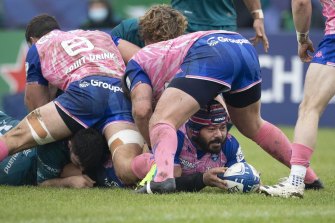 “We know now with the head-contact stuff, he is on tenterhooks there. But Gilly [defence coach Jason Gilmore] and Pauli [Taumoepeau, forwards coach] will do a lot of work there in and around the contact aspects of his game. I will probably work more with him around the mental side of it.

“They [Hunt and Perese recruitments] weren’t my doing but I presume they were positive stories and gave the board confidence to accept my recommendation on it. There are a million good redemption stories out there and I am hoping this will be one as well.”

Latu said in a statement: “I’m so excited to be going back to where it all started for me. Sydney is, and always will be, my home and I’m so fortunate to be given the opportunity to represent the Waratahs once again. I can’t wait to get started.”

Watch every match of The Rugby Championship on the Home of Rugby, Stan Sport. All streaming ad-free, live and on demand.