EXCLUSIVE: Ellie Kildunne has found her calling in rugby

EXCLUSIVE: After a childhood spent obsessing over Liverpool, Ellie Kildunne found her calling in rugby… she now forms a key part of the England side beating all ahead of them in the New Zealand as they stand two games from global glory

Growing up in Yorkshire, a young Liverpool-mad Ellie Kildunne would slick back her now distinctive mop of curly hair in a tribute to both former Reds striker Fernando Torres and Sporty Spice.

She would run around the house clad head-to-toe in the kit of her footballing hero. Now, she is the one others look up to as a modern face of the Red Roses.

At 23, Kildunne has entered the world of international rugby at just the right time. She is of a generation that is used to female players being professional. It wasn’t always the case. 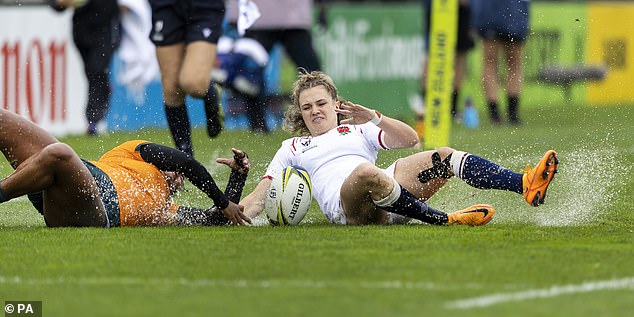 Kildunne – the epitome of today’s athlete – uses her Instagram and TikTok pages to connect with and inspire the next generation while she bids to help England to World Cup glory in New Zealand.

‘I always knew I had something in me to be able to try and do something great and influence people,’ Kildunne told Sportsmail in Auckland. ‘I had that spark.’

‘It’s one of those things where if you’ve got it, you’ve got it. Even at a very young age I wanted to shock everyone and show people who Ellie Kildunne is. It’s a fire in your belly you can’t describe but have to feel. I remember someone saying to me at primary school “Ellie I think you’re going to be famous when you’re older” and thinking then that other people think I’m destined for something.’ 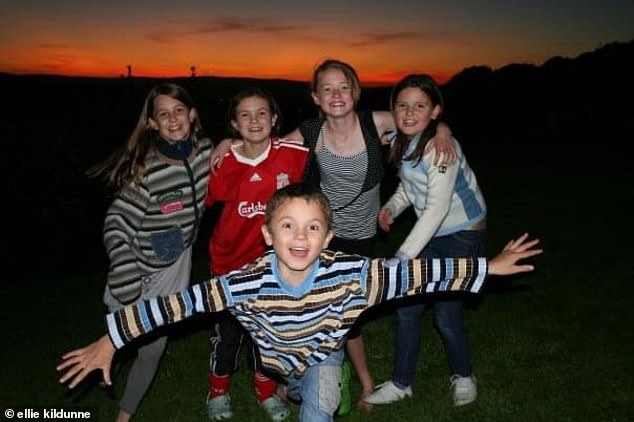 Kildunne (middle, left) in her youth donning her beloved Liverpool kit alongside some friends 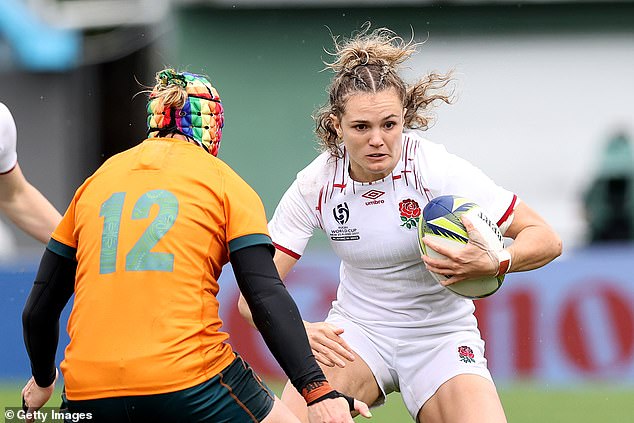 Kildunne’s calling proved to be rugby. Torres and Liverpool inspired her sporting development and she was a good enough footballer to help Farsley FC beat Manchester City 4-1 at junior level.

Nowadays, she has swapped the red of Liverpool for the white of England.

Away from the rugby field, she likes to stand out from the crowd with a bold choice in clothes. On it, her bright orange boots certainly enable her to do just that.

Melanie C remains an inspiration, but now only in a fashion sense.

‘I was the biggest Liverpool fan. My room was Liverpool themed and I dressed in full Liverpool kit all the time,’ Kildunne added. ‘I remember one game they lost 4-1 to Arsenal and I cried so much. ‘When I look back on the Liverpool kits now I wonder what I was thinking! I gelled my hair back and wore Crocs before they were cool.

‘I say a big fat no to wearing them now! I like looking good. I’m confident in what I wear and look different to everyone else. Sometimes I turn up in big parachute pants. 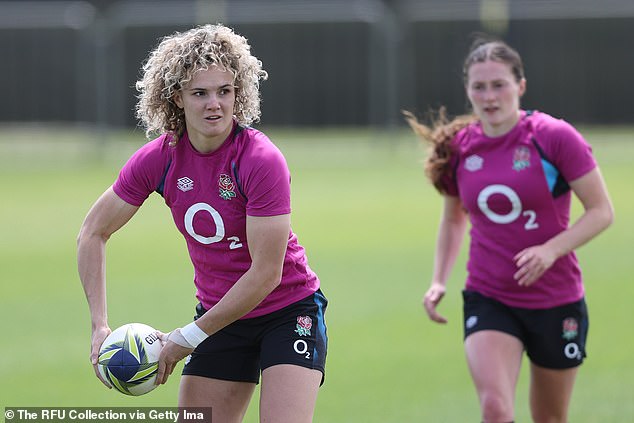 ‘But other times I might look like I’m about to go to the skatepark or I might be going as Sporty Spice! Your look is your first impression. If someone in the street says “You look cool” that’s the biggest ego boost they could give me. If you’re confident in what you’re wearing, you’re confident in what you do. I’m a big believer that doing that helps take you forward in life.’

Kildunne is true to her word on that front when she takes to the field. A daring runner from full-back, she is a handful for opposition defences and a key part of a strong Red Roses side.

In her own words she is ‘living my dream’ at her this World Cup. Simon Middleton’s team is now just two games away from global glory. Canada are England’s semi-final opponents.

‘It’s the business end,’ said Kildunne. ‘There are nerves but they’re not going to take over in a negative way. It’s excitement. We know what’s coming. Other people don’t. 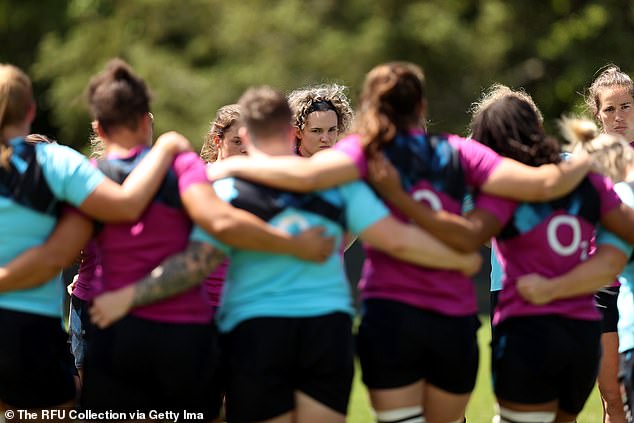 ‘We’re ready to showcase that to everybody. You don’t want to show all your cards too soon.’

Kildunne has always been one to surprise. She started her rugby career at Woodhouse Grove School and ran rings around her male opposition as part of the boys’ side.

As a girl, Kildunne was allowed to play down a year, but she was soon too good to do so.

‘There were a few complaints,’ said Kildunne. With a wicked grin, she then added: ‘I had to stop but probably the best way to be told you can’t play anymore is because you’re scoring too many tries!

‘Football has been critical to the player I am in rugby today with my vision, my ability to kick the ball, and being aware of what’s around you.’ 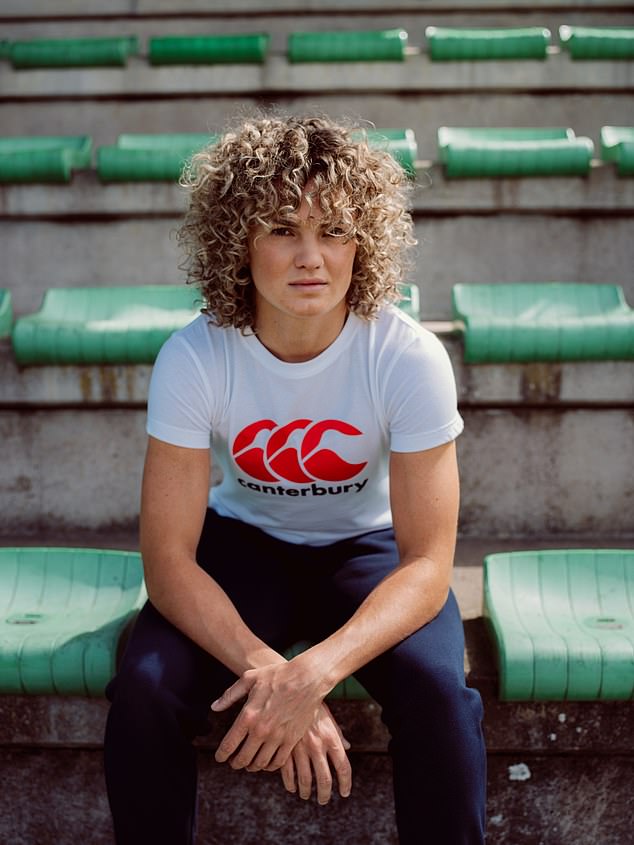 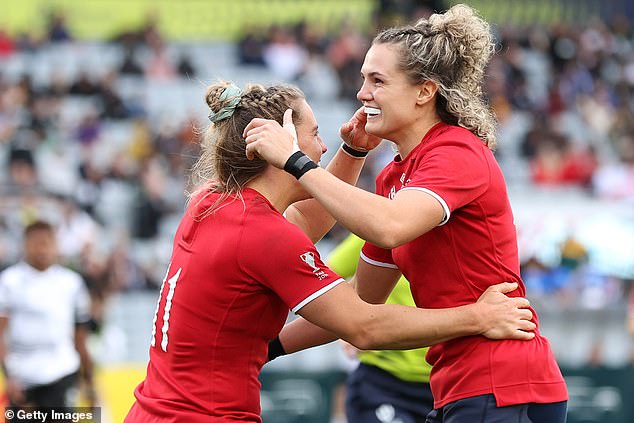 After coming through the systems of Woodhouse Grove and Keighley RFC, Kildunne struggled to find a girls team to continue her development. Aged just 16, she made the big decision to move south.

Leaving her family behind, she joined the rugby breeding ground that is Hartpury College and has never looked back. ‘Now I’m in New Zealand at a World Cup so I guess it was the right decision,’ Kildunne smiled. It certainly was. Kildunne is also using her rugby platform for good.

Her entertaining World Cup video diary – filmed with an old school handheld camera and which shows the squad’s life in New Zealand – has been popular on social media.

Kildunne uses her online platforms to spread the rugby gospel to her followers.

‘I try to be real to the girls and boys who message me,’ she added. ‘It’s about finding what your love is and what puts fire in your belly and once you’ve got it, take a good grasp of it and go with it. 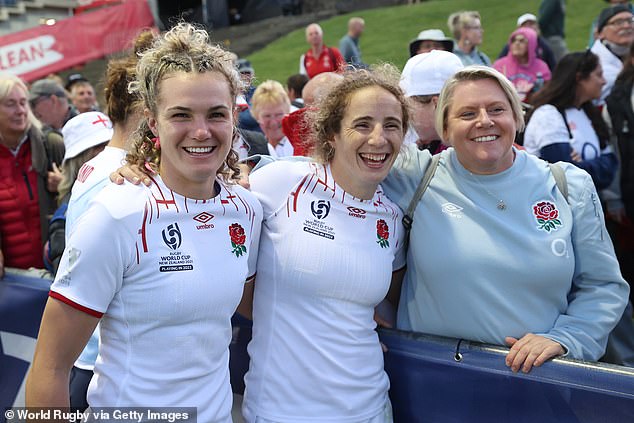 ‘I had to move away from my parents when I was 16. That was a choice, but I wouldn’t be where I am today if I hadn’t made that decision.

‘Having someone to look up to is one thing, but when you feel like you know someone – even when you don’t – that’s something else.

‘Things are changing and it’s our job to try and use that to try and get people to come and play rugby. I’m still at an age where I could be able to influence someone who could be my team-mate in a few years. ‘I’m at the start of my career and if I can bring people on that journey with me or inspire people to pick up a rugby ball, then that’s great. 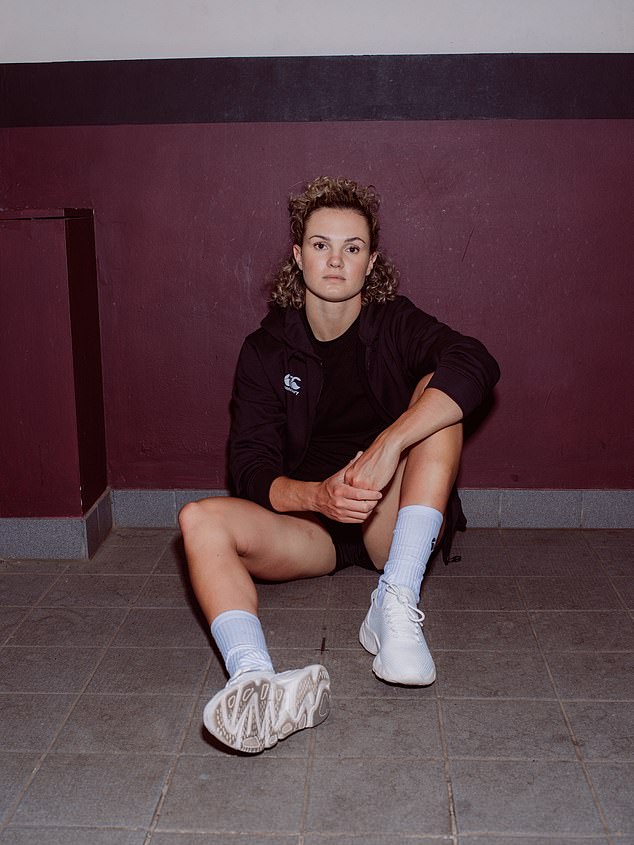 ‘Maybe one day we won’t talk about women’s rugby or boys or girls teams at school. We’ll just talk about rugby. I think that’s so important.

‘There are differences between men’s and women’s rugby but we’ve all got the same shaped ball and the same rules. It’s so important to get more people involved in the sport.

‘It’s given me a great amount of happiness. I want to share that and maybe that can allow people to feel the same as I do.’