CHRIS FOY: Is Exeter's glory era coming to an end?

CHRIS FOY: Two years after their glorious double, Exeter face a crucial week as they seek to ward off the sense that an era of prosperity could be coming to an end

Exeter could have done with Jack Nowell on duty, on the pitch – not sat in the stands in a Munster shirt, drinking beers and enjoying his stag do until Munster spoiled the party.

That’s not a criticism of a man who has given body and soul to the Chiefs, suffering multiple, demoralising injuries in the process. Sadly, he is out of action yet again, so has every right to toast his approaching nuptials.

But it would have been a jarring sight for Exeter fans to see the England wing along with fellow absentees Sam Simmonds and Luke Cowan-Dickie among spectators at Thomond Park as their team were ejected from the Heineken European Champions Cup. 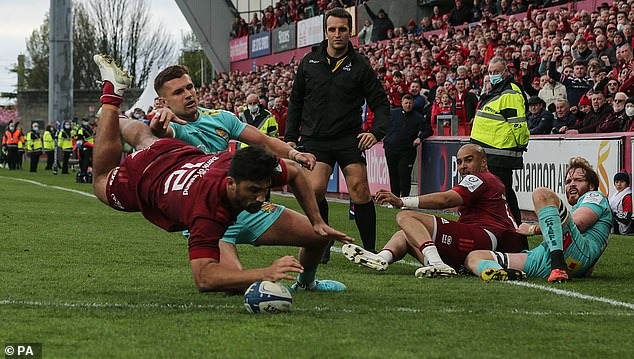 Now the Devonians face a week of profound significance, as they seek to ward off the sense that an era of prosperity could be coming to an end. Two years after their glorious Double, one major prize has eluded them and now another could be snatched away too.

After so many years of upward mobility, Exeter have finally hit a plateau and a potential dip. The last time they failed to reach the Premiership Final was in 2015, but now Rob Baxter’s men are fighting to stay in the play-off zone. By the time they visit Saracens on Sunday, Gloucester could have usurped them in fourth place.

With only three games left for the Chiefs to secure a semi-final, there is a cruel irony that Saracens – of all clubs – could legitimately derail their mission, having previously denied them titles during their salary cap-dodging phase. Even if Exeter win in north London, they may not finish fourth. This has been a come-down campaign and a time of transition awaits, with Jonny Hill, Tom O’Flaherty and Sam Skinner moving on this summer, and cherished stalwart Don Armand retiring.

At a time when the salary cap reduction is taking effect, it will be harder to build a long-term dynasty of success. Exeter’s status as the Premiership’s only profit-making club prior to Covid disruption has been off-set by the lowering of the spending limit. Baxter has made polishing rough gems an art form, but now every shiny asset will become a transfer target faster than in the past. 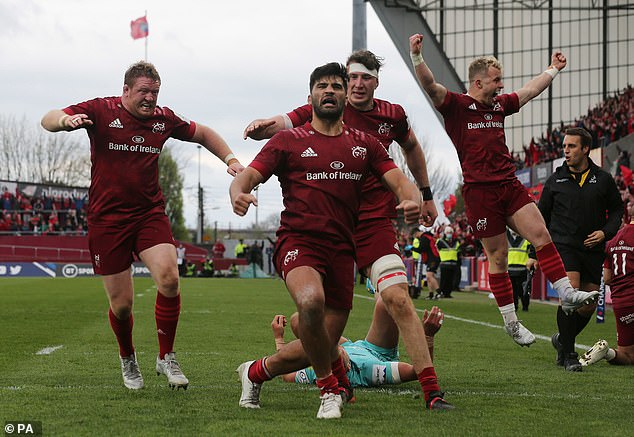 Leicester are also losing key men at the end of this season – captain Ellis Genge and George Ford – but by then they could be celebrating a first European Cup title for 20 years. The Tigers’ credentials will be forensically tested by Leinster in what should be a classic, tongue-twister of a quarter-final at Welford Road.

Steve Borthwick’s side finished off French giants Clermont Auvergne on Saturday evening and then Genge gave an insight into the high standards driving their eye-catching revival. He admitted that the head coach was furious with the first-half performance. 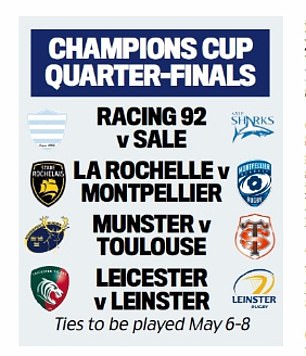 ‘It was p**s poor,’ said the prop, bluntly. ‘Really bad. It’s not what we are about. We train really, really tough to not produce stuff like that. We’ve had a b******ing and we’ll sort it. He (Borthwick) doesn’t get up at six o’clock each morning to watch us produce that, does he?’

After the Tigers had successfully maintained their hunt for both the Premiership and Champions Cup titles, Genge added: ‘Clermont have been giants in Europe for a long, long time. Leicester were eight years ago, but it’s different teams now and different eras. We’re writing our own history.’

Sale have also reached the last eight and have the power to unsettle anyone, even Racing 92, but the Parisians will be clear favourites in their futuristic La Defense Arena. Harlequins missed out by a point on aggregate to Montpellier, but any criticism of Marcus Smith’s shock conversion miss at the death is unjust. The England fly-half has won countless games with decisive shots at goal and his scorching break to pave the way for Joe Marchant’s long-range try was breathtakingly brilliant.

Overall, the second instalment of the last-16 round delivered good contests in front of good crowds – and set up potentially enthralling quarter-finals. Racing and La Rochelle – who take on Montpellier at home – can carry the French flag into the semis, but the Leicester-Leinster and Munster-Toulouse ties are wonderfully difficult to call. Let’s go with home advantage – Leicester and Munster to win.

One of the highlights from a mixed bag of fixtures in the Challenge Cup over the weekend was Alfie Barbeary’s hat-trick for Wasps, which propelled them to victory in Biarritz.

Operating at No 8, as is his new preference, the 21-year-old’s treble showcased his power, awareness and support play. 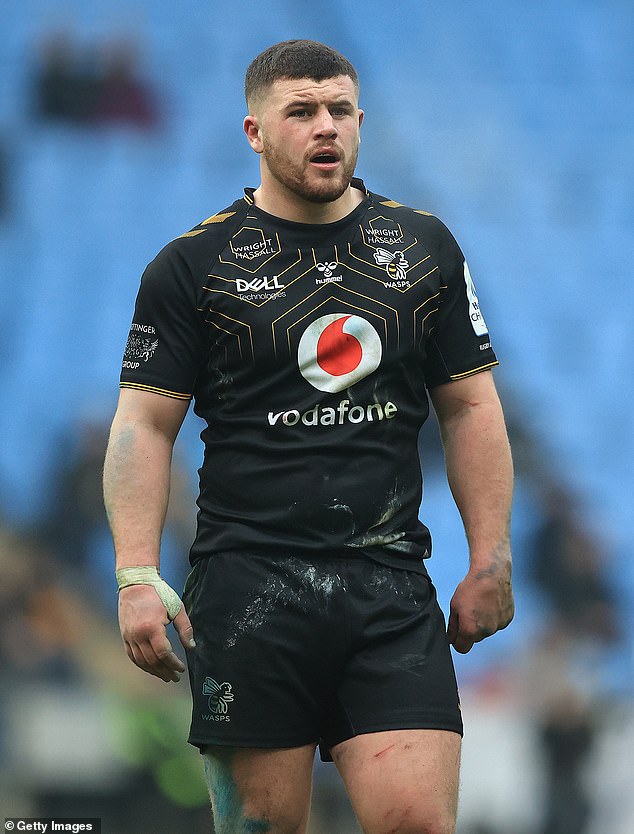 Barbeary endured a frustrating Six Nations when he trained with England and waited in vain for a Test debut, but if he finishes the season strongly, he must surely go on tour to Australia and hope to force his way into the match-day squad.

Overall, the second instalment of the last-16 round delivered good contests in front of good crowds — and set up potentially enthralling quarter-finals.  Racing and La Rochelle — who take on Montpellier at home — can carry the French flag into the semis, but the Leicester-Leinster and Munster-Toulouse ties are wonderfully difficult to call. Let’s go with home advantage — Leicester and Munster to win.

Ed Sheeran might have done Munster a favour by forcing them to relocate their quarter-final to Dublin because he will be playing concerts at their home, Thomond Park. Munster will now take on holders Toulouse at the Aviva Stadium in Dublin, which holds 51,000 —twice as many people as their iconic ground.

The conclusion of the English domestic season is in danger of being drawn-out and anti-climactic for those clubs no longer involved in the European tournaments.

With repeated shifts between leagues and continental events, there will be many fallow weeks for a lot of teams, who may struggle to remain focused and motivated — especially given the absence of Premiership relegation. After Exeter’s clash with Saracens on Sunday, the Chiefs won’t play for four weeks, while Worcester could face a five-week hiatus after their home fixture against Saracens — if they don’t qualify for the Premiership Cup final.

By rights, the Warriors’ final-day encounter with Bath at Sixways on June 4 should be a momentous survival decider, but instead it is a dead rubber. Safety considerations mean that clubs with long gaps between games can’t just abandon training entirely, but intensity levels are bound to drop.

There is a danger of going through the motions in some cases, as the season slowly fizzles out for those not in the title hunt. It should lead to a review of the whole play-off format, but it won’t.