Dan McKellar’s Brumbies have marched into a second consecutive Super Rugby AU decider and given fans a tantalising grand final rematch against the Queensland Reds at Suncorp Stadium next Saturday.

The Brumbies downed the Western Force 21-9 on Saturday evening in Canberra to set up another grudge match with their biggest Australian rival. 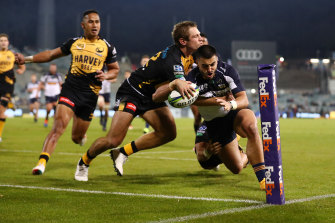 The two Toms – Wright and Banks – chalked up their home side’s five-pointers in a 12-point win that certainly wasn’t flashy.

The script is set up beautifully. The Brumbies, reigning champions, have lost both matches to the Reds this season but boast important momentum.

The Reds will go into the blockbuster having not won a game since April 10, due to their shock loss to the Western Force and a couple of rest weeks either side of that slip-up.

Queensland are aiming to win their first title since 2011.

A red card to Toni Pulu on the stroke of half-time killed the Force’s chances of regaining momentum.

Back-rower Rob Valetini was instrumental for the Brumbies. He carried into contact with venom and made the Force’s night all the more difficult.

The Brumbies had won 11 on the trot against the Force by an average of 17 points per game and it had been 10 years since the Force came away from Canberra with celebratory beers in their hands.

Hindsight is a beautiful thing but this was always going to a closely fought contest.

Saturday marked the Force’s 192nd Super Rugby match and first ever finals appearance. Sure, 60 per cent of Australian teams have made these finals in a competition without the Kiwis, but good luck talking down that achievement to the faithful in the west.

The Force have had a decent season, all things considered, and rightfully finish as the third best team in the competition but were no match on a night when the Brumbies played to their strengths.

The Force were dogged, made their tackles (90 per cent success rate), yet failed to score a try against a well-oiled Brumbies team that still has room for improvement based on this showing.

In a largely uneventful first half, Domingo Miotti slotted a penalty before Wright broke the deadlock with an outstanding finish down the right edge.

Force fullback Jake Strachan, on debut in the starters, missed a relatively straightforward tackle to gift the Brumbies the first five-pointer in front of a healthy crowd.

The Force’s woes were compounded when Pulu was marched from the field on the stroke of half-time and Banks, through quick hands to the right side, dived over to put salt in the wound and open up a 12-3 half-time lead.

Banks nearly had a second but his foot scraped the touch-line.

Miotti kicked three penalties but it wasn’t enough for the Force, whose valiant three-game run was cut short by a team that deserves to be in its second straight grand final.

The Brumbies applied real pressure through possession (61 per cent) and territory (70 per cent).

It is the grand final rematch Australian rugby has been craving.