A World Rugby vote on Thursday night confirmed Australia will have hosting duties for a third men’s World Cup – after previous tournaments in 1987 and 2003 – and a first-ever women’s World Cup.

Australia were effectively unchallenged as the ‘preferred candidate’ in a new joint venture model proposed by World Rugby, but there was still a sigh of relief when World Rugby’s member unions voted in favour of a proposed eight-year World Cup hosting plan.

After England host the 2025 women’s Rugby World Cup, Australia will host both the men’s and women’s World Cups, and then the USA will do likewise as an emerging market with the 2031 and 2035 Rugby World Cups.

RA forecasts the dual World Cups will have a massive benefit to not only Australian rugby, but the Australian economy. Bid documents project over 217,000 international visitors and more than two million people attending the matches. The global audience for the tournaments will be four billion people, and the forecasted financial output, both direct and indirect, is $2.7 billion, according to RA. 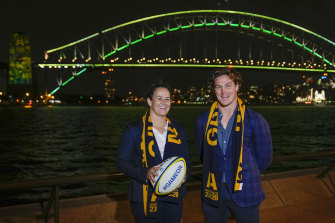 Wallabies captain Michael Hooper stands with Wallaroos captain Shannon Parry ahead of the final vote for the hosting of the Rugby World Cups in Sydney, Australia.Credit:AP

The 2027 World Cup will feature 20 nations and 48 matches over seven weeks and be played at between eight and 10 venues. Dates and locations will be finalised by the end of the year and there will be huge interest in the decision of World Rugby, as advised by Rugby Australia, about where the finals will be staged.

There are only three venues in the running to host the 2027 Rugby World Cup final: Optus Stadium in Perth, the Melbourne Cricket Ground and Accor Stadium in Sydney.

The dates and venues for the 2029 Women’s Rugby World Cup won’t be determined for a few years.

World Rugby’s vote ends a bid process that began at the end of 2017, when former Rugby Australia chief executive Bill Pulver announced Australia’s intention to have a shot at the 2027 Rugby World Cup.

Initially Australia were targeting 2031 but when preferred candidate South Africa were rolled by France for the 2023 Rugby World, the potential emerged for a southern hemisphere host in 2027. 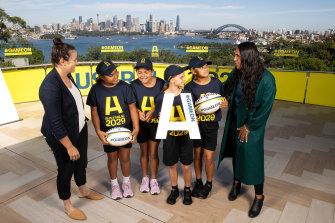 The USA emerged as a rival bidder but Australia pitched itself as a ‘safe pair of hands’ – a country with an abundance of modern stadiums and a low-risk, high-revenue host.

World Rugby flipped the script in 2021 when it decided to change hosting models, and run the 2027 Rugby World Cup in a joint venture with the host. Australia’s bid team adjusted their bid accordingly and successfully secured ‘preferred candidate’ status at meetings with World Rugby in November.

That ensured World Rugby was in ‘targeted dialogue’ with Australia only and when operational funding was guaranteed this year, from state and federal governments, the confidence levels of Rugby Australia’s bid team grew very high.

The addition of the 2029 Women’s Rugby World Cup was put on the table by World Rugby when it laid out a plan to lock down hosts for the next five World Cups in the next vote. Australia grabbed that opportunity without hesitation and World Rugby boss Alan Gilpin announced the ‘prefered candidate’ status for the 2029 World Cup when he toured Australia with World Cup officials.