Cowboys young gun Jeremiah Nanai is the latest player considering pledging his allegiance to Samoa just weeks out from the World Cup after teenage phenomenon Joseph Suaalii gave up a guaranteed Kangaroos jumper to represent the Pacific nation.

On a dramatic day for the World Cup, in which Roosters props Lindsay Collins and Jared Waerea-Hargreaves were both officially granted exemptions to include warm-up games as part of NRL bans, Australia’s title defence took a hit with Suaalii stunning coach Mal Meninga.

And there could be further eligibility chaos with the Herald being told by sources familiar with the situation, Nanai is seriously considering following Suaalii’s lead and playing for a star-studded Toa Samoa.

Nanai posed alongside Josh Papalii and Tino Fa’asuamaleaui with a Samoan flag after Queensland’s stirring State of Origin series win, and could be the next to join a Matt Parish-led side already bolstered by the likes of Panthers back-line stars Jarome Luai, Stephen Crichton and Brian To’o.

Roosters winger Suaalii was considered a walk-up start for one of the two Kangaroos wing spots in the United Kingdom, but phoned Meninga on Tuesday to express his desire to play for Samoa, who will open the World Cup against hosts England.

“The fact is we need to have a look at how we clean [the eligibility rules] all up,” Meninga said on Wednesday. 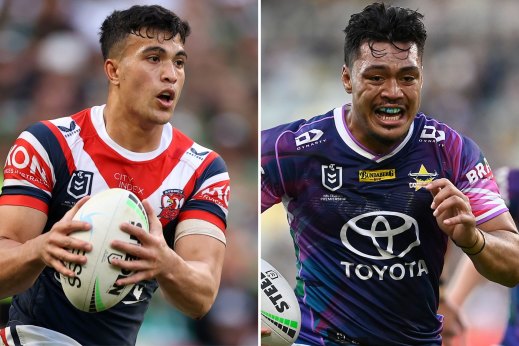 “But I’m happy for them. If they make a decision that they actually want to play for their ancestral nation, then that’s good for me. I don’t want them going away in the green and gold second doubting themselves whether they want to be here or with another footy team.

“I’m comfortable in the fact the people we pick want to be there.

While Suaalii is only at the start of what promises to be a long representative career, another Australian veteran nearing the end, Knights back-rower Tyson Frizell, has approached Tonga about the possibility of joining their 24-man squad for the World Cup.

Capped 14 times by the Kangaroos, Frizell was a member of Meninga’s last Australian team, which was beaten by Tonga in 2019.

But with Frizell qualifying for the World Cup semi-finalists by virtue of his mother Sophia, who is from the small Tongan village of Folaha, the 30-year-old had expressed his interest in being part of Kristian Woolf’s team.

There was better news for Meninga on another front with Collins being available for the second match of the tournament against Scotland, if selected. The Queenslander has rocketed into calculations with the likes of Junior Paulo (Samoa), Josh Papalii (Samoa) and Payne Haas (withdrawn) all not playing for the Kangaroos.

The Prime Minister’s XIII game will be played at Brisbane’s Suncorp Stadium on Sunday night and features certain World Cup selections, such as Daly Cherry-Evans, Josh Addo-Carr and Ben Hunt as well as emerging stars like Jake Averillo, Jake Simpkin and Beau Fermor.

Collins was rubbed out for four matches last month, but has already served two of those games in the Roosters’ round 25 and elimination final matches against South Sydney.

Australia’s application was successful, meaning Collins will only have to miss the Kangaroos’ opening pool match against Fiji.

Waerea-Hargreaves will also be available for the final game of world No.1 New Zealand’s pool stage against Ireland after similarly having a warm-up game against Super League club Leeds included in a three-match suspension.

The Roosters enforcer accepted an early guilty plea for a head slam on South Sydney’s Tom Burgess in their week-one finals loss, which potentially would have kept him out of the World Cup until the knockout matches.

But coach Michael Maguire will have Waerea-Hargreaves on deck earlier after a New Zealand application was also given the green light.

The Kangaroos and Kiwis are the top two teams in betting for the World Cup, which will begin less than a fortnight after the NRL grand final.