Dragons five-eighth Jack Bird is facing an extended spell on the sidelines after suffering a suspected fractured arm that forced him to miss the second half of St George Illawarra’s stirring ANZAC Day victory over the Roosters on Monday.

The injury couldn’t have come at a worse time for Bird, who may have a potential suitor in the coming days as he ponders his future.

The Wests Tigers, who met with Bird before Christmas, will hold a recruitment meeting this week to discuss a potential play for the former NSW player.

Bird has a two-year deal on the table at the Dragons worth just shy of $1.1m, but is holding out in the hope of securing a three-year deal. The injury could bring negotiations to a head.

“They think Jack has got a fracture in his forearm,” Dragons coach Anthony Griffin said. “We’ll have a look at it and see what happens. It’s another reason why it’s a good day to be a Dragon – we didn’t let that throw us off.”

While the Dragons won’t budge on their two-year deal, the Tigers will meet to discuss whether there is any benefit in joining the race for his signature. 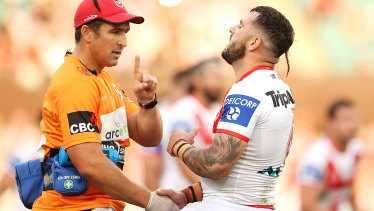 Jack Bird suffered an arm injury in the first half of the game against the Roosters on Monday,Credit:Getty

Director of football Tim Sheens, who has been in isolation for the past week with COVID-19, confirmed the club had received a call from Bird’s agent David Riolo about the prospect of joining the club next year. Sheens insists a decision hasn’t been made and would be discussed at a meeting this week.

Bird turned 27 a month ago and has been one of the Dragons’ best players to start the year, scoring four tries in the first six games of the year – the same amount he scored in 22 games last year.

The Parramatta Eels also tabled a two-year deal valued at around $1m but have since withdrawn their offer. The sticking point for the Tigers will be whether they feel Bird is worth the investment for three seasons.

The club believes he won’t leave the Dragons for anything less than a three-year deal, but the injury he suffered on Monday will do little to convince the Tigers to offer him three years.

The Tigers have been in the market for a back-rower with Luciano Leilua (Cowboys) and Kelma Tuilagi (Sea Eagles) set to depart the club at the end of the year.

The Tigers have already secured the services of Parramatta's Isaiah Papali'i as cover, but are on the lookout for another edge forward.

They are still chasing Cronulla back-rower Briton Nikora, while Luke Garner is off contract and has attracted interest from Penrith for next season.

While Bird can play in multiple positions, the Tigers – if they decide to offer him a deal – see him as a back-rower.

As reported by the Herald last month, the Wests Tigers are playing around $600,000 under the salary cap this year and are also paying around $400,000 on top of that as part of an agreed deal for Moses Mbye to play at the Dragons.

The club believes it is short on outside backs, which has been compounded by the knee injury to fullback Daine Laurie that will see him miss the next four to six weeks.