George Williams has played his last game for Canberra and is heading home to England immediately.

Williams still had 18 months to run on his contract but approached Raiders coach Ricky Stuart last month about heading home because he was homesick and his partner was expecting their first child. 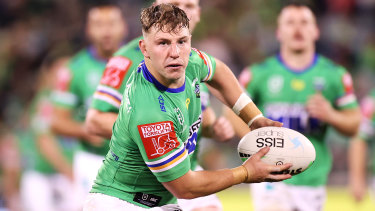 George Williams has played his last game for Canberra.Credit:Getty

Club officials were initially happy for Williams to play out the year in the hope they could unearth a suitable replacement. But after repeated requests from Williams’ management for a release, Canberra thought it was best for the club and player to go their separate ways.

The Raiders have not signed a big-name replacement No. 7 and named Sam Williams at halfback for Saturday night’s clash against the Sydney Roosters.

GeorgeWilliams’ exit will raise questions about him returning home to Wigan in the Super League, which could allow Jackson Hastings to leave and join the Wests Tigers.

Gareth Widdop and Blake Austin have been shopped around to NRL clubs, but the Raiders are not keen on either playmaker.

Canberra CEO Don Furner said on Tuesday: “George and his partner have asked on a number of occasions for a release to return to England to be closer to their families and we’ve decided to grant their request.

“George withdrew from training today and from the game this weekend, which highlighted to the club the seriousness of George’s request.

“Over the past several weeks we have supported George and provided him with the best welfare support we could, however as a club we felt that his position at the club moving forward became untenable.”

The Raiders have looked to the north of England for recruitment targets with plenty of success in recent years.

Canterbury and England international Luke Thompson grew up with Williams and said it was a shame to see his fellow countryman leave the NRL.

“It’s good having George over here, he’s one of my mates from back home, and I’ve played against him since I was 10 years of age,” Thompson said.

“My partner and I have caught up with him and his partner a few times out here. He’s been awesome during his short stint [in the NRL], but with his missus pregnant, circumstances have changed, and if it makes him and his missus happy, I’m happy for him.

“When it’s the two of you out here it’s important both of you are happy. I’m lucky my partner and I are settled in Sydney and we’re enjoying it here.”