Why the Dragons must go all-in on Cameron Ciraldo

On Wednesday night, the St George District Rugby League Football Club will announce its Team of the Century, and you suspect inductees must be either a god or an Immortal to make the cut, such is the Red V’s storied history.

One name that won’t appear on the team sheet, though, is the man responsible for most it: club secretary Frank Facer.

Otherwise known as “Fearless”, Facer was a shrewd negotiator and strategist, enticing generations of future superstars to the club in the 1950s and ’60s as first grade went on a run of 11 premierships.

Whether it was dropping just the right words in a bar to a young Graeme Langlands or securing winger Eddie Lumsden in a closed Hunter Valley pub on a Sunday morning, Facer was often one step ahead of his rivals.

It’s time for St George Illawarra powerbrokers to work at a similar pace and go after Cameron Ciraldo. 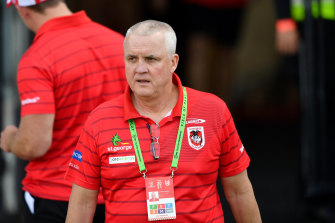 As reported by Herald colleague Michael Chammas, the board will discuss coach Anthony Griffin’s future at a meeting on Tuesday. Never a good sign.

They won’t sack him, nor should they. The Dragons are 11th on the ladder, two points out of the top eight. Titans coach Justin Holbrook seems to be struggling as much as Griffin.

But it must be disappointing to be discussing the coach’s future in mid-July with so much football left to play.

The board extended Griffin’s deal in February for 2023, to head off the type of endless speculation reserved for Wests Tigers coaches. 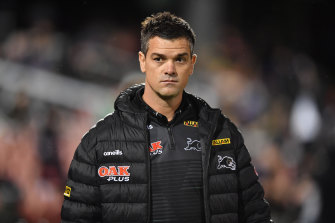 Panthers assistant Cameron Ciraldo is a man in demand.

In fairness, the Dragons had been playing reasonable football but second-half face plants against the Broncos and Roosters mean the chatter about Griffin’s future is getting louder.

Familiar complaints about him losing the confidence of some players have been around for some time. Just as it was during his time at the Broncos and Panthers, life can get frosty if you aren’t in Griffin’s inner circle.

Consecutive defeats have amplified that talk, and it’s reflected in how they often play: looking like good things one minute (think Zac Lomax dancing around defenders) and plodders the next (think Zac Lomax giving away penalties or missing tackles or doing something so very Zac Lomax-ish).

It’s frustrating because they could be everything or nothing — the Dragons and Zac Lomax.

You look at the speed of Cody Ramsey; the raw, unrefined skill of Talatau Amone; the throwback qualities of Blake Lawrie; the contained fury of Jack de Belin, and you think this team is a top-eight lock.

Then they flame out and either lose the match or just fall over the line against inferior opposition.

Time for action. Time for the Dragons board to channel its inner-Facer and go after Ciraldo.

Whether CEO Ryan Webb has it in him is debatable. But board member Peter Doust pulled off a stunning coup when he signed Wayne Bennett in 2009 and went painfully close to doing it again in 2015 before Bennett backflipped.

Clubs have been all over Ciraldo, the Panthers assistant, like an open house on a Saturday morning. The Tigers were so keen on him they visited twice, offered way over the reserve, and still couldn’t seal the deal.

Ciraldo has politely declined all offers, safe in the knowledge he has a job at the Panthers for as long as he wants while making sure he accepts the right offer. The game is quickly becoming a graveyard of unwanted assistant coaches, and he’s not in a hurry to join them.

He’s told those close to him, however, he likes the look of the Dragons because of the potential of their juniors.

If anyone understands this better than most, it’s Ciraldo. He’s nurtured the best young talent in the Panthers system since 2014.

The question the Dragons board must ask itself is how far do they think Griffin can take them from next year onwards — and how far could they go under Ciraldo?

A veteran coach whose team appears to be, at best, paddling — or the next big thing who has served a long apprenticeship?

In truth, Ciraldo is the man the Dragons have wanted all along.

When the Dragons parted ways with Paul McGregor two years ago, one of the first coaches they went after was Ciraldo.

He knocked them back, saying he wasn’t ready. The club fumbled around in the dark and, at a Tuesday board meeting, made one last play for Paul Green, who had been released by the Cowboys.

He wasn’t interested, so the club appointed Griffin. Now, the window is open again, if ever so slightly, to get Ciraldo.

I wonder what “Fearless” Frank Facer would do.