Why long, painful wait could lead to a swift finals return for Sorensen

Scott Sorensen drained the pain-killing contents of two green whistles before being loaded into an ambulance, and had to wait 20 hours for a dislocated wrist to be fixed, but the Panthers forward is on track for a remarkable NRL finals return.

Penrith coach Ivan Cleary is contemplating rolling the dice with the versatile Sorensen for a sudden-death clash against bitter rivals Parramatta – only two weeks after the back-rower left the field in agony against the Eels.

The injury was only the start of the ordeal for Sorensen, who had to wait almost an entire day for surgery at Gold Coast University Hospital with his wrist displaced.

Still wearing the jersey he played in the previous night, Sorensen spent so long waiting for his operation he was recognised by other patients as he tried to dull the pain with morphine and endone.

He eventually managed to take his Panthers guernsey off, with the assistance of others. Usually, a helper would cut the jersey to shreds to remove it, but Sorensen took it off normally as the club only has limited supplies in its Queensland hub.

Sorensen, 28, was in so much pain after trying to tackle Parramatta’s Makahesi Makatoa that he drained the analgesic from two green whistles, designed for emergency pain relief, before leaving Cbus Super Stadium. 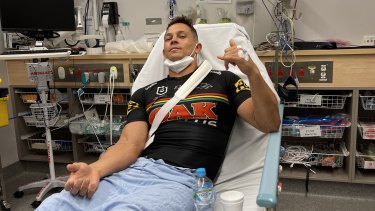 Scott Sorensen in his game-worn jersey after waiting almost 24 hours to have his dislocated wrist put back in place.Credit:Penrith Panthers

His wrist became dislocated when teammate Liam Martin clattered into his arm as he joined the tackle.

When he eventually had surgery, Sorensen’s wrist was put back into place in less than 15 minutes. There were also no fractures or tendon damage, which gave him hope his season might still be alive.

But few would have predicted he would be ready for the second week of the finals, and now the question is whether Cleary will gamble on playing the forward only a fortnight after the injury.

Sorensen has been named on Penrith’s bench for the game, tipping Spencer Leniu out of the 17. He has returned to training and will escalate contact work later in the week before the do-or-die clash in Mackay on Saturday. 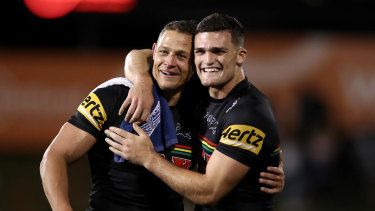 Thrown an NRL lifeline by the Panthers with a cut-price deal in January, Sorensen has impressed Cleary and the Panthers coaching staff so much they offered him a two-year extension.

“I thought his first few opportunities he was good and you would say, ‘that’s a good performance’,” Panthers legend Royce Simmons said. “But his last half-dozen games have been really top shelf.

“He’s gradually built into the team and got a bit of confidence out of it. He’s brought some controlled aggression, some really strong runs and some really good hits, which have straightened some blokes up. You’re seeing a lift with the first few tackles he makes and carries with the ball.

“I’m sure they won’t play him unless he’s ticked every box.”

The Panthers are aiming for a spot in the grand final qualifier against minor premiers Melbourne, having been relegated to their side of the draw after a shock loss to South Sydney last week.

Dylan Edwards (foot) and Moses Leota (calf) have been named for their returns alongside Sorensen, with a decision to be made on all three closer to game day.

Asked about his injury, Sorensen told the Panthers website: “Coming from the field they did try to put it back in. They were trying to be gentle with it for my sake, but at the same time trying to put it back in as hard as they could. There was no way that was going to happen.

“It was difficult [to stay positive], but once I knew the fracture wasn’t there I started looking at it a lot more positively. I was slowly trying to bring the weeks down from 10 to eight to six and hopefully less and less.”

And now it could be as little as two as a desperate Penrith try to keep their season alive.

Meanwhile, Leota has given the Panthers a huge boost before their elimination final by signing a two-year extension to stay until the end of 2024.