Why a trade window is a must for the NRL, clubs … and players

It was a cheeky reference to a mega financial offer by the NRL’s 17th franchise, the Redcliffe-based Dolphins.

But the serious Munster was seen at the Storm’s pre-season training camp when he excitedly outlined an intricate move his teammates had been rehearsing.

“How many players does that involve?” I asked, trying to keep up with the feints, shifts, decoys and loops. “Seven”, he replied in an instant.

Coach Craig Bellamy, listening to the conversation, questioned this number, slowly rehearsing the move in his mind before finally agreeing.

Then there’s the Munster I watched in the seconds following Melbourne’s 2020 grand final victory. He was elated, but there was a tinge of disappointment which I attributed to his assessment that his performance was not good enough to win the Clive Churchill medal. Discussing this with Bellamy later, the coach said, “That’s the Munster the public does not see.” 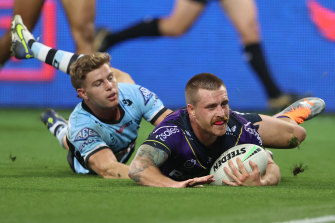 So, if Munster 2020-2022 is fascinating enough, why is the media focussing on Munster 2023 and even Munster 2024? Implied in recent coverage is the expectation Munster will agree to join the Dolphins from 2024 and then request a release a year earlier.

NRL clubs, frustrated by daily enquiries into the contract sagas of the Munsters, Kalyn Pongas and Luke Brooks, ask why the obsession with contracts which have years to run. The most common answer is invariably, “clicks”.

It’s hard to believe these stories generate readers when most are recycled versions of previous reports, sometimes with incremental detail. Maybe readers are searching for something more.

Most “news” about our elite players comes accompanied by dollar signs and future years, turning them into commodities to be traded like wheat. As media companies own teams and acquire naming rights to stadiums, there is already the risk footballers are becoming mere assets for entertainment empires.

The AFL’s own ground in Melbourne is named Marvel Stadium, which no doubt suits a code identifying itself with Guardians of the Galaxy, but it runs the risk of its players acquiring the flatness of cartoon characters.

The AFL, like the NFL, has a draft while soccer has transfer windows, but the NRL has neither. So, unless the NRL and RLPA change the current contracting arrangement, the focus on future seasons – rather than this year – will continue.

It’s a contracting system which suits only player managers and those who rely on them for information.

The player is not protected. He can’t sign a contract until November 1 in the year before his final season. If, for example, Munster in August agrees to a $1.2m-a-year deal with the Dolphins for seasons 2024, 2025 and 2026 and is seriously injured in the finals, the Dolphins can withdraw the offer. (It happened with Storm forward Christian Welch and Parramatta). Meanwhile, the Storm could have allocated Munster’s salary cap money elsewhere, meaning he is now forced to search for another club. As Storm recruitment officer, Paul Bunn, says, “It’s Russian Roulette for the player.”

The club also loses. Memberships, sponsorships and gate takings suffer as fans become turned off by a favourite player effectively warehoused for a season, having agreed to join a bitter rival the following year. If a club has evidence a rival club is attempting to induce its player to break his existing contract, and they report it to the NRL, the club alienates its own player and incites his agent.

ARLC chair Peter V’landys wants a tribal game, yet the system means half the fans’ playing tribe can be signed elsewhere before a season starts.

The most common argument advanced against an end-of-season trade window is that players need time to re-locate their families. School teachers and policemen aren’t given warning 12 months out from a new placement. Journalists change jobs in weeks. Wests Tigers could sign a Bronco today to fill a final spot on a roster and he could be at Concord tomorrow. Take the case of the Storm forward, Tepai Moeroa. He signed halfway through the 2021 season and moved to Twin Waters with his wife and three young children within three days. Two weeks later, the club moved back to Melbourne and a week later Moeroa was relocated to Noosa.

If NRL players want more money at the next CBA, they must surrender their opposition to trade windows.