Western Bulldogs midfielder Josh Dunkley is set to undergo shoulder surgery this week, which will rule him out for multiple months of the 2021 AFL season.

Dunkley injured his shoulder in the Dogs’ win over GWS on Friday night, and while his shoulder surgery is significant there remains hope he could recover in time to play late in the season or early in the finals series. 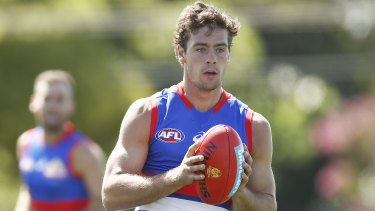 Josh Dunkley will miss most of the AFL season.Credit:Getty Images

The Dogs’ win over the Giants was a costly one in terms of injury, with star ruck Tim English set to miss at least this week’s game against Richmond due to concussion, and the luckless Lin Jong injuring his hamstring.

Richmond have their own injury worries with Dustin Martin set to miss with concussion. Kane Lambert (calf) is likely to miss while Dylan Grimes has an ankle complaint.

Nick Vlastuin and Dion Prestia are also not set to be available for selection either.