‘We will wear the jersey’: Hasler apologises for handling of Pride strip

Manly coach Des Hasler has apologised for the way the club handled the rollout of their rainbow jersey, and spoke of his concerns for the welfare of the seven players who have opted to boycott Thursday’s game.

Josh Aloiai, Jason Saab, Christian Tuipulotu, Josh Schuster, Haumole Olakau’atu, Tolu Koula and Toafofoa Sipley will all miss the clash against the Sydney Roosters clash because the one-off jersey, which embraces all minority groups, including the LGBTQIA+ community, clashed with their religious and cultural beliefs.

Hasler apologised for the lack of consultation and communication with the players before the playing strip was made public.

Speaking in front of a giant media throng beneath 4 Pines Park at Brookvale, Hasler said he believed in inclusiveness — “the NRL is for everyone” — and wanted to make sure the seven players who had been heavily criticised on social media for their stance were looked after.

“They were not included in any of the discussions about the decision-making with the jersey – at a minimum they should have been consulted,” Hasler said.

“There will always be subsets of society who have cultural and religious views, and they must always be considered. 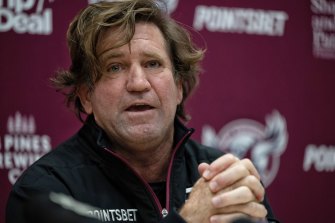 “None of the coaching staff nor players had prior knowledge to the jersey.

“They are not wearing the jersey because it conflicts with their cultural and religious beliefs. I’m concerned for their welfare. Their spirituality is a central part of their well-being.

“The club has made an error for which we will learn.

“The players won’t play on Thursday and we accept their decision. These young men are strong in their beliefs and convictions. We will give them the space and support they require.

“The playing group are solid and understanding of each other’s views. As a club, we will wear the jersey on Thursday night.”

Hasler confirmed the seven players would attend Thursday’s game, but said, “I can’t answer that” when asked what kind of reception they could expect from their own fans.

Skipper Daly Cherry-Evans said the decision by so many of his teammates to make themselves unavailable had not put a strain on the playing group.

“We have to make sure we look after our teammates because it’s going to be a period they haven’t experienced before as professional athletes,” Cherry-Evans said.

“There will be 17 players out there celebrating inclusiveness and diversity. Hopefully we can start to shift our attention towards the good intentions that we had.

“We understand the footy part of this. We’re trying to play finals football, every game counts, and we’re playing against a side that isn’t far away from us on the ladder.

“We get all that. But these are decisions we have to accept, and for someone like myself as captain, it’s an opportunity to try and bring the group together and try to do something special on Thursday night.”

Hasler quoted Harvard University professor Robert Putnam, Mahatma Gandhi, and a close friend on the autism spectrum who was initially upset with the club’s rollout of the rainbow jersey, but later appreciated the need for the same tolerance he accepted from people and the way they treated him.

He apologised to the minority groups as well as the ARL Commission, the NRL and 15 rival clubs for “creating negative news and shifting the spotlight from the launch of the Women in League Round”.