Warriors to stay put in Australia despite trans-Tasman travel bubble

The Warriors won’t be rushing home to New Zealand following the formation of a trans-Tasman bubble, fearing the club could be “ripped apart” should they get stuck in Auckland in the event of a new outbreak.

The New Zealand government announced there will be a travel bubble with Australia, without the need for mandatory quarantine, from April 19. However, the Warriors are sticking to their original plan of remaining on the Central Coast until June 21, with a view to playing their first home game at Mt Smart Stadium on July 2 against the Dragons. 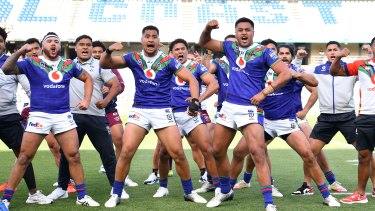 The Warriors fear another outbreak would tear the club apart should they head home ahead of schedule.Credit:NRL photos

All family members of Warriors players who wanted to stay in Australia have been given the opportunity to do so. The decision to commit to remaining in the country until June 21 was partly to ensure children could remain in their current schools until the term expires.

“It effectively means it will be two years without a home game,” George said.

“If we went home in, say, three weeks’ time, [and] there was an outbreak and Auckland got shut down, we’d be ripped apart again,” George explained.

“Where would we go? I’m sure this accommodation would be gone, our stadium deal would be gone and so on. It would remove us from a very low-risk situation and put us into a very volatile situation.” 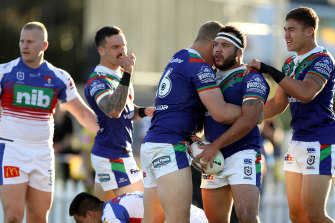 The Warriors are staying put in Australia for now.Credit:Getty

The April 19 bubble start date will ensure the trans-Tasman portion of the Super Rugby competition will go ahead as planned.

Rugby Australia and New Zealand Rugby are yet to figure out the logistics of what may happen if a team is caught in a foreign city during an outbreak but the 10 Super Rugby clubs are committed to playing the competition.

The bubble will also allow Wallabies and All Blacks players to avoid quarantine upon return to their home nation prior to the July Tests.

In some positive recruitment news for the Warriors, their star fullback signing from next year, Brisbane’s Reece Walsh, has been given permission to join the club immediately. The Broncos had hoped to receive rookie playmaker Paul Turner in return via a player-swap deal, but it appears they may not be able to accommodate him.

Turner was poised to agree to the move on the proviso that he received a top-30 spot at Red Hill, but the Broncos don’t currently have one available given that Walsh was on a development contract.

In other player movement news, Dragons forward Eddie Blacker and Panthers counterpart Billy Burns are poised to trade places via a player swap.