Under-strength Panthers march on against Raiders

Penrith triumphed over Canberra on Saturday in a chaotic encounter littered with key injuries and reports to extend their lead at the top of the NRL ladder.

The 26-6 loss came with a hefty price for the Raiders.

They conceded ground in the race for the finals after losing prop Joe Tapine, who didn’t return in the second stanza following a first-half rib injury.

Penrith were playing without their star halves pairing of Nathan Cleary and Jarome Luai along with second-rower Villiame Kikau and survived an injury scare of their own when fullback Dylan Edwards, who was playing his 100th NRL game, pushed through pain to put in a clinical display.

The clash threatened to turn spiteful early in the second half when Raiders winger Nick Cotric hit Edwards high to spark remonstrations. Cotric was sent to the sin bin for his shot.

That followed Penrith prop James Fisher-Harris doing 10 minutes in the bin in the first half for a high shot on Ryan Sutton, after which the Canberra forward failed a head injury assessment and did not return to the contest.

Fill-in Penrith five-eighth Jaeman Salmon was also put on report after appearing to lash out with his boot and make contract with Raider Tom Starling’s face and groin. 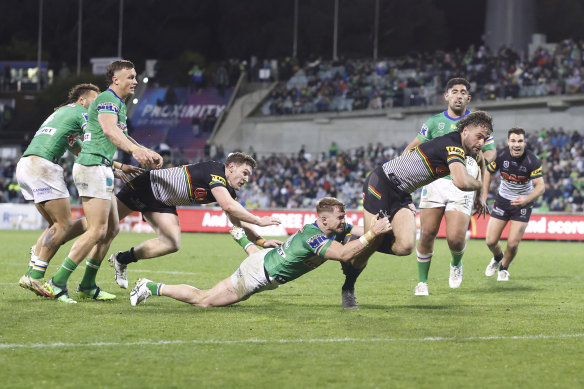 But Edwards, who had earlier looked ginger after being drilled by Jordan Rapana, responded perfectly with a try on 54 minutes to breaking Canberra’s spirit and cap a 155m, six-tackle bust display.

Penrith centre Stephen Crichton marked his return from a sickening ear injury with a try, and Salmon scored a crafty try in the second half to complete the rout.

But errors again haunted the Raiders and they couldn’t capitalise on some strong territory in the opening stages.

They lacked their usual punch through the middle without Tapine and with Sutton’s limited action and couldn’t find a way through Penrith’s brick-wall defence, which held them to one try from 41 tackles in the 20m.

The result is a crushing blow to Canberra’s finals hopes because they now sit a game back from the eight-placed Sydney Roosters, although all four of their remaining matches are against bottom-eight teams.