The NRL career of Tyrone May is again at the crossroads after Penrith stood him down immediately until a club board meeting determines whether to sack the controversial playmaker.

May was one of three Panthers players hit with proposed fines from the NRL for “acting contrary to the best interests of the game” during the club’s grand final celebrations.

The NRL integrity unit investigated a series of incidents following the Panthers’ premiership celebrations, opting to issue breach notices to May, Nathan Cleary and Stephen Crichton worth a combined $18,500.

The matter will begin and end with fines for Cleary and Crichton, who are facing fines of $7,000 and $4000 respectively after they were photographed on social media acting in a disrespectful manner toward the NRL premiership trophy.

May, however, faces the prospect of his contract being torn up after his latest incident.

The NRL proposed a $7,500 fine for May, who was instructed to complete further education programs after being part of “social media posts which do not align with the values of the game.” However, the Panthers shave stood the utility down from club-related duties until further notice and the matter will be considered further at the upcoming meeting of the Panthers board. 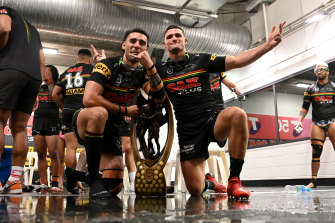 The Panthers crossed the line in their grand-final celebrations.Credit:NRL Photos

May narrowly avoided a jail sentence after pleading guilty to four counts of intentionally recording an intimate image without consent in 2020. The saga appeared to be over when the victim began civil proceedings against May, with the parties settling out of court earlier this year.

However, during the grand final celebrations, May captioned a photo of himself and Panthers coach Ivan Cleary leaving Parramatta Local Court with lyrics from Canadian rapper Drake: “And the dirt that they threw on my name turned to soil and I grew up out it. Time for y’all to figure out what y’all gon’ do about it. Love my brothers”.

The woman at the centre of the sex scandal broke her silence on the weekend, revealing the post had forced her to relive the entire ordeal again.

“Definitely, there was a traumatic response,” she told the Sun-Herald. “I see my psychologist on regular occasions and I have to work through that. I had quite a lot of panic attacks, so with this coming back, it triggered that as well.

“I walk around in Penrith and everyone is looking at me because they know [it’s me in the video]. I’m walking around paranoid 24-7.”

The Panthers have apologised for the behaviour of Cleary and Crichton, who were photographed on social media acting in a disrespectful manner towards the NRL premiership trophy.

The sculpture of Norm Provan and Arthur Summons was damaged while in the care of the club, with the club ordered to pick up the repair costs. Provan, a league Immortal, died last week at the age of 89.

“The Notice alleges the Premiership Trophy was damaged at a Club Awards night and although not personally responsible for the damage, the players subsequently treated the Trophy in a manner which showed disrespect towards the individuals depicted in the iconic moment memorialised on the Trophy,” the NRL said in a statement.

In relation to the trophy incident, Panthers Group CEO Brian Fletcher said: “The Panthers players had no intention to show disrespect towards the trophy, Norm Provan or Arthur Summons, however they understand that’s how their actions may have been interpreted.

“Everyone at Panthers is well aware of the immense contributions Norm and Arthur made to our game and the high esteem in which they are held by everyone involved in Rugby League.

“On behalf of the club I sincerely apologise for any offence or distress this matter may have caused the Rugby League community and particularly the Provan and Summons families.”

NRL chief executive Andrew Abdo hinted at the prospect of sanctions when he labelled some of the celebratory shenanigans as “disappointing” and damaging to the game last week. However, several other incidents went unpunished.

May was also the subject of a separate probe, with the integrity unit investigating whether three men caught illegally crossing the Queensland border to watch the grand final had links to him and Cleary. No action is expected to be taken over that matter.