Tiger Tough: Noah’s arc is trending in the right direction

It can often take a freakish or unusual moment under the brutal glare of the Friday night AFL TV audience for a player’s name to be thrust into the limelight on talkback radio and the subject of chatter on cyberspace for much of the weekend.

Such was the case for Noah Cumberland a week ago after the young Richmond player’s split-second decision to play on as the final siren sounded against Fremantle, cruelly denying him the chance to boot a winning score from beyond 50 metres. 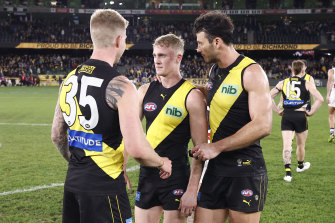 Instead, the AFL season had its first draw and the Richmond fraternity were left to ponder another lost opportunity as they desperately strive for a finals spot.

The last-minute drama ensured, too, that 21-year-old Cumberland has yet another experience to draw upon from just four albeit drama-packed AFL matches, including a sudden debut as an unactivated medi-sub.

That happened at the SCG in round 11 when Cumberland was removed from a nearby VFL game mid-match to take his spot in Richmond’s 23 in a narrow loss against Sydney. Quirkily, it was also the night of more drama surrounding the final siren when Richmond players unsuccessfully pleaded for a 50-metre penalty that would have brought Dion Prestia within range of goal after receiving a free kick when Swan Chad Warner, apparently not hearing the whistle, kicked the ball into the crowd. 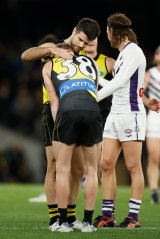 Fast-forward eight weeks and Cumberland, with three solid AFL hitouts on his resume, was the player with ball in hand at the final whistle at Marvel Stadium and preparing to launch a shot at goal with his powerful left foot against the Dockers. But the siren rang and the rest is history.

Experienced teammates Trent Cotchin and Jack Riewoldt were among those to offer immediate support and coach Damien Hardwick said later: “He’s disappointed as any kid would be. But the fact of the matter is … it’s part of the whole equation.”

For a split-second call that overwhelmingly attracted sympathy rather than scorn, the yellow and black fraternity are bullish about Cumberland.

Richmond drafted Cumberland from Queensland in 2019, and he has shown resilience in his AFL career despite rupturing the ACL in his knee the following year. Cumberland was delisted by the Tigers last year but, true to their word, they picked him again as a rookie.

The fans like what they see so far. One yellow and black wag noted on social media the following statistic about Cumberland’s three full games: “Update on scoring shots after first 3 games (on the park): Noah Cumberland: 16 Royce Hart: 19.″⁣

Richmond’s player development manager and former ruckman Ivan Maric showed just how much the club values Cumberland on a video posted on the club’s website.

“Your journey has been different, like no one else’s,” said Maric, when presenting him with a Richmond guernsey celebrating his debut.

“The adversity that you’ve had to deal with since you first got picked up by us, with your knee injury, and you come back with great character and great attitude.

“This is only the beginning of your journey. It’s going to look so different and random and that’s a great characteristic of yours … that’s [what] we love about you Noah.

“This is something that your family should be super proud of because you’ve gone through so much. You always handle adversity and success with great attitude and that’s going to be really important for you moving forward.

“So congratulations … we love who you are as a person and what you’ve brought to the football club so far, and we look forward to the future.”

One person with an insight into what makes Cumberland tick is Andrew Cadzow, one of his coaches from his junior club Maroochydore on Queensland’s Sunshine Coast. He believes Cumberland will bounce back strongly.

TIGER EARNING HIS STRIPES UP FORWARD

“He’ll be really upset, because he lives his heart on his sleeve,” said Cadzow about last week’s events.

“But he’s had bigger adversity. He’s been slapped around more times than that.

“By the looks of it the club [Richmond] wrapped their arms around him really quickly. There wasn’t any hesitation.

“He’ll bounce back twice as big. He’ll be better for it.” 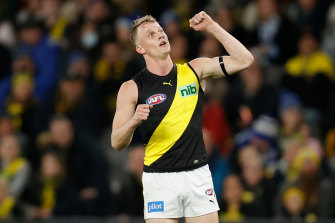 Noah Cumberland is earning his stripes at the Tigers.Credit:AFL Photos

Drafted with a reputation for having a strong and penetrating left-foot kick, various pundits were confident the young Tiger could have carried the distance to win the game against Fremantle.

“[He’s] a terrific kick,” Cadzow said. “It’s funny, that distance the other day [the shot after the siren] wouldn’t have worried him, especially if you’ve got 20 metres to aim at, not six metres [when trying to merely score a point].

“Powerful, explosive [and] the old adage – ‘he plays tall for his size’.

“He was always a match-winner, he always did things explosively. He always kicked the goal at the right time and made something happen. He always had that ability.