‘They won’t be rewarded’: AFL issues warning to clubs, players on high contact

The AFL has issued a warning to clubs, saying any player who ducks or shrugs into tackles will not win head-high free kicks and all players should stop using their heads to draw frees.

After weeks of controversy around Collingwood’s Jack Ginnivan and whether he was being umpired differently, the AFL sent a reminder to all clubs, commentators and fans that the umpires have been told not to reward players who try to milk frees.

The league said any player who ducks, drops or shrugs into a tackle to draw high contact would be called to play on. Ginnivan has stopped being paid free kicks in recent weeks for high contact to which he contributes. Some other players, however, have been paid frees for similar incidents.

The AFL said in round 18 umpires had wrongly paid a free kick to Melbourne’s Kysaiah Pickett for head-high contact when the Demons forward had raised his arm to force the tackle to go high. Play on should have been called.

AFL umpires’ boss Dan Richardson said in the message to all clubs that while tacklers have a duty of care not to hit opponents high, the player being tackled also had a duty of care to themselves not to deliberately put their head at risk in trying to draw a free kick.

Earlier this week, doctors told The Age that players who duck into tackles to attract free kicks must be “protected against themselves” and warned of the risk of neck injury, brain injury and concussion associated with the tactic.

“We want to be clear, if the umpire believes the ball carrier is responsible for the high contact, then they won’t be rewarded,” Richardson said. 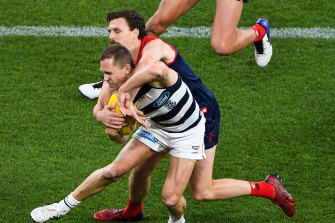 “First and foremost, players attempting to win the ball must be protected and the onus of duty of care is on the tackler. However, having won the ball, the ball carrier has a duty of care to not put themselves in a position for high contact,” Richardson said.

“Ultimately, the rules do not reward players for putting themselves in vulnerable positions to draw a free kick. This is something we prefer not to see in our game at any level.

“Our umpires strive to get every decision right, every single time, however there are instances where, just like players, decisions are made at full speed at ground level without the benefit of slow-motion replay.

“The health and safety of players is the primary concern of both the AFL and the clubs, and we will continue to work with clubs, their coaching panels, as well as players to ensure the safety of the game.” 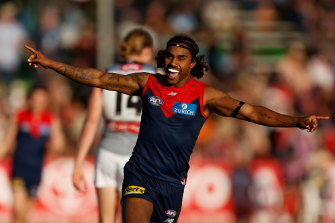 Kysaiah Pickett celebrates one of his six goals in round 18.Credit:AFL Photos

The AFL said the rules had been in place all year and the interpretation had not changed.

Despite that, there appeared to have been a palpable shift in how umpires have approached such incidents in recent weeks.

Ginnivan, who had been the lightning rod for the issue after being awarded the most head-high free kicks in the first part of the year, has stopped receiving such free kicks as frequently and play on is more often being called.

The league issued a video explanation of three tackles from the last two rounds. One involving Ginnivan the AFL said was correctly called play on, as he lowered his body and raised his arm.

Another involving Pickett looked from the umpires’ view to be a clear high-contact free but from another angle showed the umpire was mistaken in giving the free kick, as Pickett raised his arm to draw the free and play on should have been called.

The AFL said the instructions to umpires are: