The Rugby League Players’ Association sent its players a text message encouraging them to go public with their concerns over rule changes and a perceived lack of consultation after a controversial weekend where several unwanted disciplinary records were set.

The message, obtained by the Sydney Morning Herald, encouraged players to use media and social media to voice their concerns about the crackdown on high tackles, coming after a number of other rule changes in the past 12 months, and the recent edict being enforced despite little input from players. 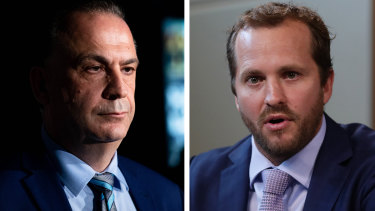 The message was sent just 24 hours before a meeting between RLPA boss Clint Newton and NRL powerbrokers Andrew Abdo and Peter V’landys on Tuesday, in which the NRL agreed to meet with the game’s senior players over the next week. The NRL was unaware of the message until contacted by the Herald after the meeting.

“We’ve consulted with your Player Advisory Group over the weekend to gather their collective feedback on the impact of increased fatigue, lack of consultation, sin-bin edict for head and neck contact, 6 again rule and the rule change process,” a message from the RLPA sent to the players on Monday said.

“We plan to put this feedback to Peter [V’landys] tomorrow (Tuesday) and seek assurances moving forward. We understand your frustrations and we’ve expressed our concerns numerous times since the new rules were first introduced and we’ll continue to push for inclusion in the current and future decision making process.

Newton, who wasn’t the RLPA representative who sent the message to the players, denies that it was sent to undermine the NRL but rather encouraged players to speak their minds.

“I think we’ve seen the opposite from players around it,” Newton said on Tuesday night when asked if it was a ploy to undermine the governing body’s edict. “The understanding of what happened has been really good. The initial impact on the weekend was a bit of confusion and frustration, but everyone, once the air gets taken out of it, understands.

“We’ve been very vocal in that. We’re supportive. There are improvements requested and something we’re looking forward to working on and something they’ve committed to, which is a good step moving forward.”

V’landys declined to comment when asked about the message the RLPA sent to the players. On the same day the message was sent, Manly captain and RLPA president Daly Cherry-Evans told the Herald the players were frustrated with a lack of consultation.

“It’s the ability of them being able to move so quickly on things, it’s left the players guessing,” Cherry-Evans said on Monday.

“We are not looking to run the game. We are players. We know that. I know I’m just a player in the game but I am just hoping that, because we are such a big part of the product, maybe they want to hear about how we think the game can improve.”

The rule changes the NRL implemented over the off-season were made by the innovations committee, which includes South Sydney’s Damien Cook and the Sydney Roosters’ Luke Keary, as well coaches Craig Bellamy and Ricky Stuart.

At a meeting on Tuesday, the NRL agreed to meet with the player advisory group next week and insisted the players’ safety and welfare, and the future of the game, will remain at the forefront of their decision making.

“Today’s meeting was really productive,” Newton said. “We put forward the concerns and queries the players had towards Peter and Andrew. They took on board and understood how players the players felt. They’ve committed to a strategy moving forward to ensure players feel part of some of the decision making. We have a good strategy in player engagement going forward.”