Matthew Knights found out pretty quickly at Essendon just how difficult it is to follow a club legend in the hot seat.

After 27 years of Kevin Sheedy as coach and regular success, the Bombers were never likely to show too much patience. As Sheedy’s successor, Knights was on a hiding to nothing. 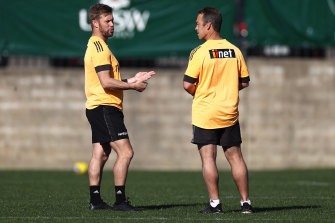 Michael Voss, a champion at Brisbane, found Leigh Matthews a hard act to follow. The pressure of taking over from coaches of that stature is immense.

It’s why Hawthorn must not rush any decision on replacing Alastair Clarkson – if and when they decide it’s time to part ways. Right now, the murmurs around the Hawks seem to be that Sam Mitchell is already locked in as Clarko’s heir apparent, despite his inexperience as a coach, although club president Jeff Kennett recently told The Age’s chief football writer Jake Niall there were “no guarantees”. In any case, I think the talk is premature.

There can be no doubting Sam’s CV as a player, but as good as Mitchell was on the field, that doesn’t ensure success as a coach. For example – Voss, James Hird and further back, Tim Watson. This trio all had incredible footy IQs.

Clarkson has a contract for next season, but the Hawks have stated publicly they’ll sit down at the end of the year to work out what’s best for both parties. The question is, does Mitchell think he’s ready?

As it stands, he’s coached five games in his own right at the helm of Box Hill in the VFL and in my view that simply isn’t enough for him or the club to know he’s the right man to lead after Clarkson.

No doubt, he’s had a great grounding under Clarko. And, yes, Mitchell had experience at West Coast under Adam Simpson with one season as a player/coach, and another as an assistant coach. While Simpson is his own man and would have learned as much at North Melbourne under Denis Pagan as he did under Clarkson, he’s still a Clarko disciple.

For the most part, the Clarkson way is all Mitchell knows. He should be looking for greater experience elsewhere before taking on what is surely a lengthy rebuild.

The Hawks had tried to buck the trend by topping up, but now their situation might get worse before it gets better, given they still rely heavily on a number of established players. There’s also much more to coaching than tactics. Coaching is about management, relationships and even psychology.

And they’re attributes that are often hard to gauge until someone becomes a senior coach, because of pressure that’s applied to that position.

So many coaches say you never really know how hard it’s going to be until you live it. And, even more so now, we’re hearing about the increasing strain senior coaches are under as they deal with cutbacks to the soft cap.

Having got to know Ross Lyon recently during our time at Triple M, he’s given many great insights into the pressure-cooker environment that is coaching. He says people can forget you’re still human. Often you have to put on a brave face when you’re really hurting. The outside noise is that Mitchell is ready for that, but what does Sam think?

Is he better placed than someone like Voss, given his experience at Brisbane and now Port Adelaide? I’ve got no doubt Voss would be a better coach this time around, just like former Carlton coach Brett Ratten seems much more assured in his second chance at St Kilda.

If and when Clarko decides the time is right, should the Hawks approach a Voss or a Knights who’ve already sat in the big chair?

I’d actually be urging Sam to give Vossy a call. Get a feel for some of the challenges that will be unique to coaching at a club where he was a star and won premierships; a club that’s had such a dominant figure as coach for more than a decade. How did he handle the pressure? What would he do differently?

Mitchell might very well be able to coach. But let’s not burden him before his senior coaching career even starts. Both parties – Mitchell and Hawthorn – should be cautious, otherwise any succession plan might not pan out the way they want it to.