‘The pencil will come out again’: Fittler faces big call on Crichton

Angus Crichton is the only potential addition to the NSW side looking to win the series on Queensland soil in just 16 days time.

While coach Brad Fittler will find it hard to drop any member of the team that piled on a record-breaking 50 points on Wednesday night, Crichton would have been one of the first Blues picked had it not been for an untimely suspension playing for the Sydney Roosters. 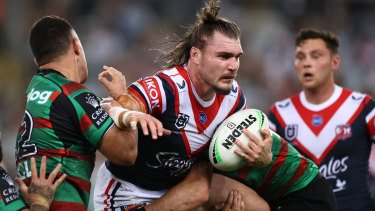 Does Brad Fittler welcome back Angus Crichton for game two?Credit:Getty

Fittler said there were a couple of rounds of NRL football and it was time to “get the pencil out again”.

Tariq Sims, who earned a recall at Crichton’s expense, was nothing short of outstanding on the left edge and almost went on a search-and-destroy mission, which evoked memories of his Anzac Day efforts in 2018 when he terrorised Cooper Cronk.

Liam Martin also held his own off the bench and got under the skin of Maroons playmaker Cameron Munster.

“We can’t get ahead of ourselves,” Fittler told the Herald. “There are still two weeks to go, and we haven’t won a game there [Suncorp Stadium] since I’ve been coaching. They’ll have some players coming back. 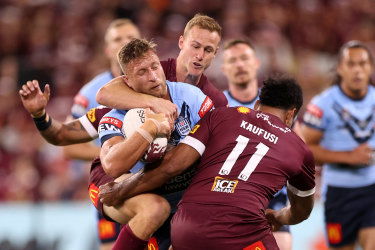 Search and destroy: Tariq Sims was all class on the left edge.Credit:Getty Images

“Angus becomes available for us. I’ll just have to sit and watch. The pencil will come back out. Tariq was fantastic for us and did a great job.”

Pushed on whether he would stick with the same team if there were no injuries or suspensions in the next fortnight, Fittler said: “I’ll wait and see.”

Crichton, 25, returns from a two-match dangerous contact ban for the Roosters against the Gold Coast on Saturday. He has played seven games for the Blues and was one of their best when he stepped up for the injured Boyd Cordner last year.

While the Crichton call looms, there is no such debate about Fittler’s halves pairing halves after Jarome Luai’s brilliant debut alongside good friend and Penrith pal Nathan Cleary. Luai was so relaxed he even referred to referee Gerard Sutton as “bro”.

Cleary said afterwards Luai’s presence in the dressing room calmed him, even though he had already featured in three previous Origin series.

“He was less nervous than I was, which just sums him up,” Cleary said of Luai. “The way he plays, his confidence is infectious on the rest of the group. I love playing along side him. He actually makes me calmer and more confident in my job.

“I had full belief in him playing well, but he went to the next level again. I think Origin really suits his game, too. He has that X-factor.

“People were worried about his defence but I thought he defended really well too, and was always putting his team first and his body on the line. He was great. I first played with him in under-16s and now we’re in Origin, it’s crazy.”

Cleary said Crichton would naturally be a topic of conversation, especially given his ability to play on an edge or in the middle.

“Angus is a big one, but I’m not too sure how it will work – you can’t go wrong either way,” Cleary said. “Liam Martin was also outstanding off the bench. We’ll see how it goes.”