The numbers don’t lie: Why this year’s AFL grand final is shaping as an epic

This shapes as an epic clash and a fitting return to the MCG for the sport’s showpiece event, for the Cats are on a 15-game winning streak, while the Swans are also surging.

The Cats were last in the big dance in 2020, when they lost to the Tigers, but eight players from the victorious preliminary final side on Friday did not play in that game: Jeremy Cameron, Isaac Smith, Tom Atkins, Brad Close, Sam De Koning, Zach Guthrie, Tyson Stengle and the injured Max Holmes, who is fighting to be fit for this clash. 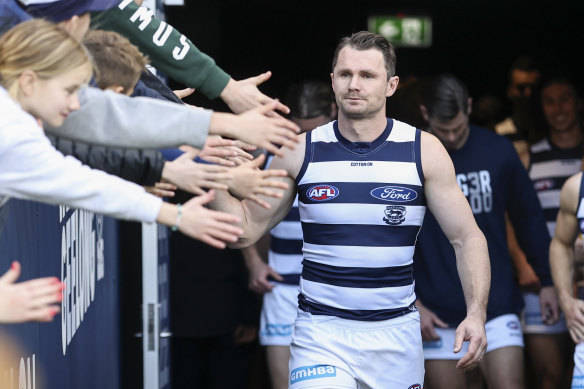 Patrick Dangerfield has achieved just about all there is in football – bar a premiership. Now comes his chance to taste the ultimate success.Credit:AFL Photos

For Chris Scott, a second premiership would validate his standing as one of the finest coaches of the modern era, given this flag would have come after much frustration and soul searching.

The Swans are also a tale of how to challenge, rebuild on the run, and then go again. It’s a decade since John Longmire guided his team to a premiership over Hawthorn, but the Swans have been in two grand finals since, the last in 2016. This latest appearance comes with more than a third of their side aged 22 and under, a point acknowledged by Lance Franklin.

“We now get an opportunity to go down there against Geelong, who have been an unbelievable team this year,” Franklin said.

Speaking of the great man, the champion forward has another chance to frank his nine-year contract, this being the last year of that deal – and perhaps the last of his distinguished career. 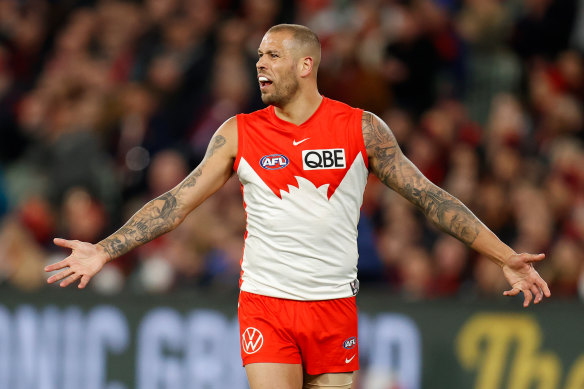 Lance Franklin has more than repaid his $10 million deal with the Swans, but a premiership would cap his time with the club. Credit:AFL Photos

For the AFL, this grand final is already a win, for it involves a major Victorian club, and the glamour team of a Sydney market the league continues to battle to crack.

Regardless of the result, the football world would agree it’s just good to have the pilgrimage to the grand final back at the home of the sport.

History has been kind to the Cats and the Swans this century. They each know all about grand finals and premierships, the Cats having played off in six grand finals in the past 16 years. While there was defeat in 2020, memories of flags in 2007, ’09 and ’11 are still alive, particularly for Joel Selwood, Tom Hawkins and Mitch Duncan.

“Aside from those guys, it’s been a complete rebuild,” Scott said.

The Cats and Swans met once this season, at the SCG in round two when the home side prevailed by five goals. The contest, however, was best remembered for Franklin booting his 1000th career goal, sparking jubilant scenes among the crowd. Isaac Heeney booted five goals and Franklin four, while Callum Mills, Jake Lloyd and Chad Warner were busy. Brad Close was the unexpected major goalkicker for the Cats, booting four.

It may seem odd to say Jeremy Cameron could be the Cats’ wildcard, but his ability to influence a contest up the ground or inside 50 shapes as a telling factor. That double punch was on show against the Magpies in the qualifying final, when he booted three goals and was arguably best afield. 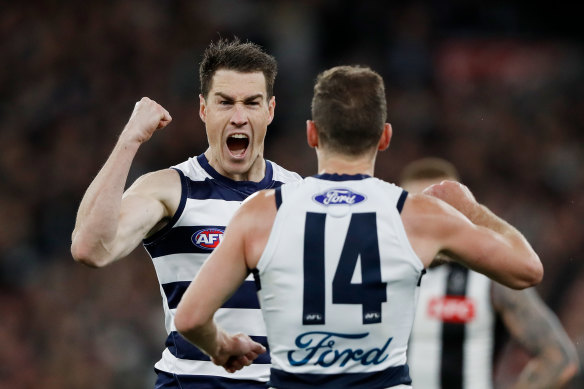 He is regarded by teammates as the best kick at the club. However, in the preliminary final, he didn’t have the same influence, booting a goal from his 12 disposals (admittedly, he was more concerned about escaping injury in the final term). It didn’t matter, though, for the Cats were dominant elsewhere. Should Cameron get off the leash against the Swans, the Cats are likely to be well on their way to glory.

For the Swans, Tom Papley can turn a contest in the blink of an eye, his three goals against the Magpies on Saturday reinforcing how pivotal he is. He may be one of the more annoying opponents but, to the Swans, he is precious, for his pace and canny instincts make him a crucial weapon inside attacking 50. Should Sam Reid be absent through injury, Papley’s ability to hit the scoreboard will take on even greater importance.

The Cats appear to be the complete package this season. A major rethink over summer of player positioning, tactics and tempo has meant they are the team to beat. Their team defence has been superb, for they regularly allow Tom Stewart to be the loose man – his fellow backmen rotating around to ensure he is the rebounding playmaker. Mitch Duncan can also play this role. Ruckman Rhys Stanley, at times, has been used as a defender, allowing Mark Blicavs to ruck.

“Their tactic of dropping their ruckman behind the ball meant that we were seven v six a lot of the time. They managed to intercept mark our entries,” Lions coach Chris Fagan ruefully acknowledged on Friday night. Sydney beware.

At the other end of the field, the Cats are ranked third for scoring, and first for scores per inside 50. In Cameron, Hawkins and Stengle, they have three members of the All-Australian forward line. They have versatility across the field, highlighted with Cameron pushing further afield to use his elite kicking. Tom Atkins has provided leg speed in a midfield where veterans Joel Selwood and Dangerfield still loom large. The decision to manage and rest the latter pair through the season (Dangerfield, admittedly, had soft-tissue issues) has been central to the Cats’ rise. That Dangerfield was best on ground against the Lions on Friday night said it all.

Should Holmes (hamstring) miss the grand final, the Cats have a list of strong replacements, including Mark O’Connor, Sam Menegola and Brandan Parfitt. Then comes the jockeying to be the medical substitute.

For the Swans, their ability to win stoppages and clearances, and swarm forward is central to their game. Or, as Luke Parker said, it’s about pressure. The Swans also like to send their high half-forwards up the ground, a tactic which troubled the Magpies when the home side built a six-goal lead.

So much of their attack is directed towards Franklin, but fellow tall Logan McDonald must have an impact on Saturday, particularly if Sam Reid is absent.

It’s hard to go past the Cats, for their momentum appears irresistible. In saying that, the Swans have won nine in a row. Selwood, in his time as captain, and Dangerfield, now healthy, understand this is their best chance of tasting the ultimate success.

“Compared to where he’s been previously, it’s chalk and cheese. He’s a bit older but he goes into the biggest game of the year in the best shape he’s been in in four years,” Scott said of Dangerfield.

The Cats have the versatility, game plan and talent to get the job done. It now comes down to execution.