In the lead-up to the State of Origin decider, Angus Crichton spoke about his role as the “enforcer” in the NSW forward pack.

“It’s cool,” he told Channel Nine. “That’s my role in the team. A little bit of spark off the bench is good fun.”

He then opened up about his relationship with runner Morgan Mitchell, admitting he was a “bit of a romantic”.

That’s the Blues version of an “enforcer”. Queensland’s version is Tino Fa’asuamaleaui, who is also a romantic; one that’s deeply in love with the notion of inflicting as much pain and violence on any Blues player within his field of vision.

The Maroons forward had a particular fondness for NSW centre Matt Burton’s youthful head in the decider, swinging an arm at it in the first half before getting it in a headlock early in the second after Burton ate a flurry of punches from Dane Gagai.

These are the laws of the Origin jungle. They are different to the NRL. To any type of football for that matter. They always have been. 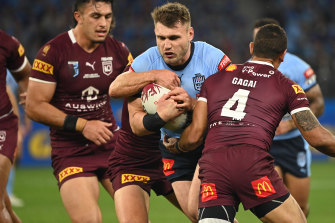 Much like the decider at Suncorp Stadium in 2020, Queensland understood them better than NSW on Wednesday night.

Fa’asuamaleaui did more than just rough up the Blues. He led every kick chase, particularly on kicks early in the tackle count. He made a point of launching himself at any player who dared to make the first hit-up.

Kalyn Ponga, Ben Hunt, Daly Cherry-Evans and Harry Grant are being lauded for Queensland’s game-three miracle, but Fa’asuamaleaui represents the fundamental difference between the two teams.

His presence rattled the Blues, who nervously fumbled their way through the second half, sabotaging any chance they had of victory. He also took advantage of the NRL’s inconsistent attitude to foul play – and got away with it. 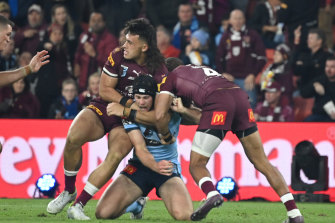 The NRL insists the same rules apply to Origin as regular competition matches, although few believe it. It also insists there’s no room for thuggery but then invites it on the eve of the series by introducing a preference for fines instead of suspensions for representative matches.

Consequently, Fa’asuamaleaui received two fines for his indiscretions involving Burton, not time on the sideline for the Titans.

NSW coach Brad Fittler lamented that Burton was sin-binned for defending himself while Fa’asuamaleaui stayed on despite his ugly headlock.

He had a point but what’s becoming clear is the Blues need to stop complaining about the referee and challenging him, bending the rules like their Queensland rivals. For years, Billy Slater and Cameron Smith pushed the boundaries at every level. Is it any coincidence this Maroons side has done the same now they are coaching?

I’m not saying it’s right or wrong – although, personally, I take my Origin with a dash of mayhem – but if that’s the way Origins will be officiated, the Blues need to select players of that ilk. Players with anger issues. Players who can genuinely enforce.

Provided he’s fit or not suspended, Roosters lock Victor Radley is a must next series. So, too, raw-boned Jack Wighton, who was overlooked for game three after missing the second match with COVID-19.

Fittler didn’t pick Wighton, the Blues’ best in game one because he didn’t want to upset the balance of the bench, preferring second hooker Damien Cook and Siosifa Talaki, who could cover centre and backrow. It proved to be a fatal mistake.

Cook came on in the 53rd minute and ran twice for nine metres against an allegedly tired Maroons defence. Talakai made some ghastly errors late in the match, although he wasn’t alone on that count.

When NSW can dominate the middle, as it did in game two in Perth, they can play pretty Penrith football. When they don’t dominate the ruck, and can’t play on the advantage line, they seem incapable of wresting back momentum.

Halfback Nathan Cleary was confronted with the same problems as game one: forever cramped for space in attack, or on the backfoot when he was kicking. His attacking kicks rarely hit the mark, nor found support players rushing through.

Fittler likes to use a lead pencil when selecting his teams but after this series defeat might want to use a red pen and rule a line through some players.

Blues have got Joey down

Thoughts and prayers right now for Channel Nine expert and Herald columnist Andrew Johns, who looked like he’d drunk a schooner of nails on the after-match panel.

Johns is attracting criticism for this remark: “Now we have to listen to the bullshit you go on with for another 12 months.”

If I know the man at all, it’s impossible for him to hide his emotions. When the Blues lost game two of the 2017 series, after failing to target an injured Johnathan Thurston late in the match, he was the crankiest person in the NSW dressing-room as he interviewed the players.

He wore the same cranky head late on Wednesday night. What people didn’t see were the hundreds of well-marinated Maroons fans at the fence, hurling abuse at him.

Johns’ reaction shows how much he cares about the Blues. He wasn’t involved in their camp this year, but it wouldn’t surprise if Fittler approached him about getting involved next time.

The Wests Tigers’ search for a new coach has been as calamitous as the sacking of the old one.

The Tigers on Thursday announced Tim Sheens will return to the helm for two years before handing over to Benji Marshall.

A week ago, this column spoke at length to Sheens for a story about Nathan Cleary and playmakers and what makes a good one.

The conversation veered into talk about the coaching situation at his club and reports he was about to take the role a decade after being sacked – a decision that prompted Sheens to launch legal action in the Supreme Court for damage to his reputation.

Sheens rejected the idea of coaching again, speaking at length about not rushing to appoint a coach. He was dismayed at the campaign from sections of the media trying to make it happen. 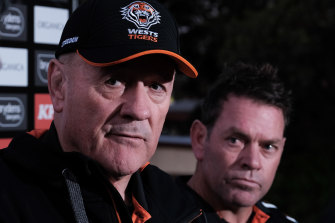 His comments were in stark contrast to those provided to journalists a couple of weeks earlier at a lunch at which Tigers chief executive Justin Pascoe and chairman Lee Hagipantelis were also present. The lunch was at Pascoe’s second office, Grappa.

Tigers fans wonder why there’s always so much speculation about their club. This might explain why.

Nick Kyrgios received a standing ovation from the most unlikely people hours after his loss to Novak Djokovic in the Wimbledon men’s final.

When Kyrgios and his entourage returned to the large house they had rented out for the tournament, they were greeted by about 30 neighbours who had waited two hours for him to return.

It highlighted the dramatic shift in perception around the Canberran, who was pilloried after spitting towards spectators in the first round but as loved as Neighbours by the final.

Another nice touch came after the match when members of the Djokovic players’ box warmly congratulated the Kyrios box directly after championship point.

Much has been made of the Kyrgios and Djokovic “bromance”, but the most important bromance you can have is the bromance you have with yourself so Kyrgios is taking a short break in the Bahamas before re-joining the ATP Tour.

He has also been summoned to front ACT Magistrates Court on August 2 in relation to one count of common assault involving his ex-girlfriend.

NRL has Ability to make a difference

The push for a dedicated “Disability Round” in the NRL will ramp up on Friday when several players attend a clinic at the NSWRL’s Centre of Excellence.

What Ability is a not-for-profit charity that exists to unlock community experiences for people with a disability and their families.

Many current players, including Tom, Jake and Ben Trbojevic, Joseph Suaalii, Joe Ofahengaue and Jai Arrow, are support workers for the foundation.

THE QUOTE
“The best team will win the match.” — Blues halfback Nathan Cleary on the eve of Origin III. And Queensland did. #sadface

THUMBS UP
Exciting news for sports fans and nightclubbers: NBA Hall of Famer Shaquille O’Neal will be assuming his position behind the Pioneer decks at Marquee Sydney in late August under his alias DJ Diesel. Sources familiar with the situation have told the Herald the former Lakers centre will be laying down phat beats on new shapes.

THUMBS DOWN
Cricket Australia needs to add a clause to Steve Smith’s contract forbidding him from using DRS. His dreadful waste of a referral in the second Test in Galle, after he was trapped plumb, was one of the lowlights in Australia’s collapse and eventual defeat by an innings against Sri Lanka.

It’s a big weekend for … the Wallabies, who have gone from having the series against England by the throat to Eddie Jones cracking jokes and sledging Queenslanders for wearing scarves. The third and deciding Test of the series will be played at the SCG on Saturday night. Let’s hope the referee keeps his cards in his pocket.

It’s an even bigger weekend for … Tiger Woods, who will look to whack his tee-shots at the 150th British Open with the same controlled anger as he whacked Greg Norman earlier this week. That said, Tiger, please be mindful of the conditions. May I suggest sheathing the driver and using an iron off the tee, keeping it low and straight into the wind. Where do I send the invoice?