Two AFLW pre-season matches have been moved to the MCG and will be played as double-headers with men’s matches in round 22, giving a new group of players their first experience playing at “the home of footy”.

The Melbourne and Carlton practice match will kick off at 4.40pm on August 13 and open for the men’s 7.25pm blockbuster clash, while Richmond and Hawthorn women will play the following day at 10.30am before the men’s 1.10pm game. 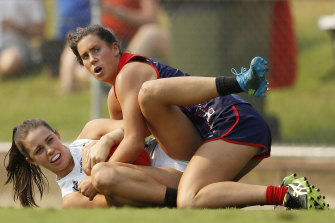 She also said the double headers made it easier for fans to catch both their clubs’ sides in one weekend.

It will be a particularly historic occasion for expansion club Hawthorn, as it will be the first time their inaugural women’s side will be taking the field at AFL level.

Hawthorn’s general manager of operations and AFLW Josh Vanderloo said it would be momentous for the club and players, many of whom have never played at the ground before.

“It’s really exciting that we’ve been able to move this game to the home of footy, the MCG,” Vanderloo said.

“Our inaugural squad has made some great progress over the course of the pre-season and this is a great way to continue our preparations for round one.”

Similarly, it will be the first time for many of the Richmond and Carlton players take to the iconic park.

The Blues’ Breann Moody said the Carlton playing group was thrilled about the venue change and that “the entire team is looking forward to it”. 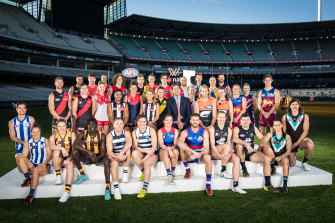 “We hope as many fans as possible can get to the ’G early next Saturday and stay afterwards for the AFL match as both are shaping up to be really hard-fought contests,” said the All-Australian ruck.

Last season, the first AFLW game was played at the MCG when Melbourne beat Brisbane in a preliminary final, which Demons ruck Lauren Pearce said was “a surreal moment”.

“The whole experience was just a bit of a whirlwind but a good one,” Pearce said.

“I know we play games at Optus Stadium and everything, but I think, you know, the men play their grand final there, it’s the home of footy and I think having the chance to be able to play on it, I think everyone was just excited.”

Pearce also said the practice matches would be a great moment for those in the playing group who didn’t get the opportunity last season.

“We’ve got sort of a core group still together from last year that have played on it, but there definitely were a couple that missed out, that I know were super keen … I definitely think that they will lap it all up and enjoy the moment and be very excited.”

The pre-season games will potentially be the first of many double headers, with all Saturday games across September in the AFLW’s season seven fixture currently a floating fixture to allow for flexibility with scheduling for opportunities with the men’s competition.

Hawthorn and Essendon senior coaches are already pushing for their blockbuster round one clash to be moved to Marvel Stadium, with Hawks coach Bec Goddard starting the #MoveItToMarvel hashtag during the AFLW fixture launch last month.

“This is a first-time event for both of our clubs. There’s no men’s football on that weekend,” said Goddard.

“We’ve got 70,000-plus members of traditional football clubs and a rivalry that goes unsurpassed.

“If we sell it out, it’s going to have to get moved to Marvel … I checked. There doesn’t seem to be anything else on [at Marvel Stadium]. So, hashtag move it to Marvel, the movement starts here.”

AFLW season seven kicks off on August 25 with a Thursday night clash between traditional rivals Carlton and Collingwood at Ikon Park.