The finals form guide: Where week one will be won and lost

Rivalries from one end of Sydney to the other, with player poaching and venue squabbles added to an already volatile mix.

A 30-year friendship between one pair of old mentors is put on hold, while two of the game’s best new coaches collide thanks to remarkable 2022 turnarounds.

The NRL finals are upon us, full of sugar, spice and all things nice as the Herald breaks down where week one will be won and lost.

The recent history: Parramatta prevailed 22-20 in May, before catching a surprisingly lethargic Panthers outfit off-guard in round 20 when Cleary was sent off. Penrith are 3-2 from their past five clashes, with three games decided by two points or less and one blow-out win each.

The main man: Reagan Campbell-Gillard. RCG’s minutes have been up significantly over the past six weeks and he’s thriving with the added workload. Brad Arthur effectively runs with a 15-man rotation and keeps two men fresh thanks to the mountain of work Campbell-Gillard and Junior Paulo get through, with RCG topping 150 run metres the last three times he’s tussled with his old Penrith side. 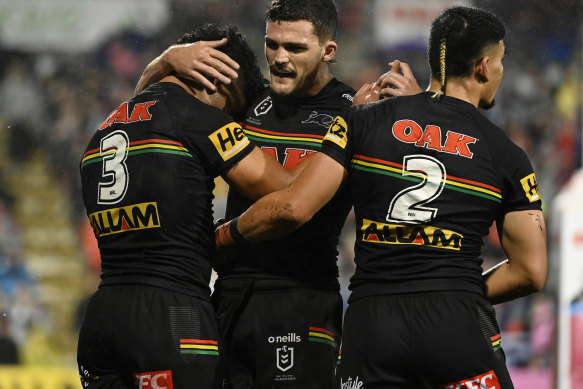 The stat: 9.7. Parramatta have led the NRL for offloads in three of the past four seasons, including 2022. The difference to previous years is their 9.7 errors per game, roughly 15 per cent less than last year and second only to Penrith (8.9 per game).

The breakdown: Parramatta have troubled the best defensive side of the past three seasons more than any other outfit, downing the premiers twice already this year.

Mitchell Moses’ kicking game has matched Nathan Cleary’s on these occasions, while the Eels round 9 upset at Penrith saw 17 offloads from the visitors and back-rowers Isaiah Papali’i, Ryan Matterson and Shaun Lane cutting back inside on unders lines to great effect and disrupting the Panthers defence.

Penrith’s yardage game remains the best in the league across all key metrics – not least kick return metres and handling errors. Cleary’s return from a five-week suspension only heightens that reliable base. Viliame Kikau has been in career-best touch on the Panthers left-edge and will have Moses on his radar – though the No.7’s defence has improved markedly in recent years.

The recent history: One apiece this year with Canberra snapping five straight losses to the Storm when they kept their season alive with a 20-16 upset in July. The Raiders are one of few who shouldn’t fear the AAMI Park trip – they’ve won their last three games in Melbourne.

The main man: Cameron Munster. Who else? Munster has racked up career-best numbers for tries (11), try-assists (15), line breaks (17) and line break assists (15) already and 111 tackle busts has him tracking to do the same in the category too. Jahrome Hughes’ expected return helps Munster keep the defence guessing just as much as his switch to fullback. 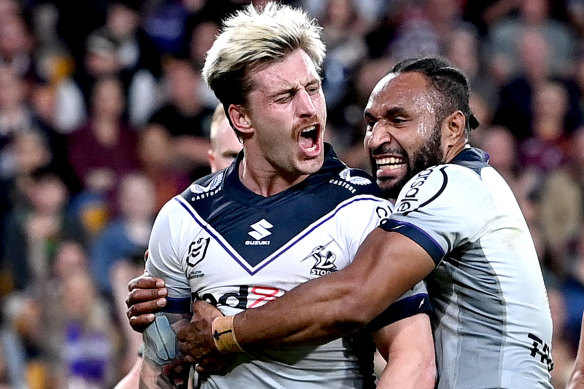 The stat: 24. Canberra’s 13 spine combinations are the most by any side this season, with Melbourne’s 11 different 1, 6, 7 and 9 line-ups just behind them. For the Raiders especially, continuity in the halves has taken time after Fogarty’s three-month knee injury after arriving from the Gold Coast.

The breakdown: No denying Canberra have had the easiest run into the finals than most but can’t begrudge them making the most of it either. If they’re to jag an upset against the Storm, it will be by taking on big men Nelson Asofa-Solomona and Jesse Bromwich as the Roosters and Eels have done successfully in recent weeks.

Not for nothing, no side has scored more tries than Canberra through the middle channel of the field thanks to the world-class platform laid by Joe Tapine and Josh Papalii. Jack Wighton should fancy his chances too against an at-times shaky Storm right-edge defence.

Melbourne have been under siege on and off the paddock but still boast the NRL’s best dummy-half rotation in Harry Grant and Brandon Smith. Any play-the-ball that’s average pace or better unlocks these two, not to mention Cameron Munster on either edge.

The recent history: Give it a grain of salt – the Cowboys rested several Origin players when the Sharks snagged a 26-12 win in Townsville. No denying Cronulla have the wood in this one though, they’ve won the past eight clashes and North Queensland haven’t won in The Shire since 2014.

The main man: Nicho Hynes. No half goes to the line more than Hynes, who averages 17.3 runs a game from 62.3 receipts, while only Jackson Hastings and Ben Hunt touch the ball more among halfbacks. A run-first mentality at the scrumbase has been the basis of Cronulla’s resurgence, with Hynes riding it all the way to Dally M medal and Kangaroos contention.

The stat: 14.7. Reuben Cotter’s average decoy runs (7.8 – third in the NRL) and support plays (6.9 – 15th) per game. Forwards typically lead up the decoys as you’d expect, but only Cotter combines the two key off-the-ball stats so well. His work rate and mobility around the middle has been game-changing for the Cowboys.

The breakdown: Bodies in motion and mettle in defence has fuelled both these outfits, particularly North Queensland.

New centres Valentine Holmes and Peta Hiku have been critical in turning what was the worst defence in Cowboys history (31.17 points conceded each game) to the club’s best (15 points per game).

The addition of a pass to Jason Taumalolo’s game has opposition sides thinking twice about piling three and four defenders in on him, which then brings Reece Robson and Reuben Cotter to the fore around the ruck.

Cronulla, too, have found serious improvement in the middle with Braden Hamlin-Uele and Royce Hunt in career-best touch and Toby Rudolf returning. Telling clash of bash and barge versus leg speed in the middle with Chad Townsend and Nicho Hynes calling the shots behind them.

The recent history: Souths prevailed in round 3 but both sides are nigh unrecognisable from that one. Put your stock in the Roosters 26-16 last-start victory – not least the Rabbitohs 10-6 second half. The Bunnies finished with all the momentum after a typically fast tricolours start. Mitchell will no doubt carry the jabs and jibes of a sub-par performance for the next week – often a precursor to his destructive best. 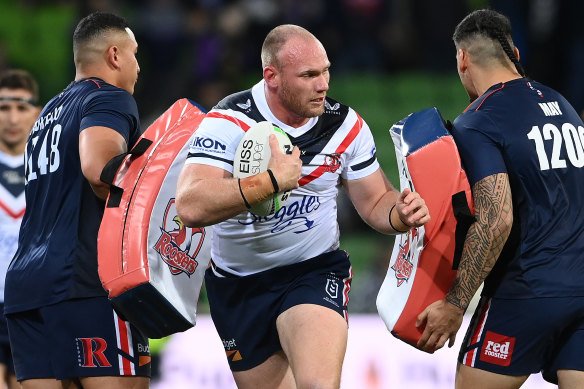 Matt Lodge has been a revelation since arriving at the Roosters.Credit:Getty Images

The main man: Trent Robinson’s right centre. Whoever lands at right-centre as Joey Manu’s replacement – be it Paul Momirovski, Oliver Gildart or Joseph Suaalii – they’ll be defending the Rabbitohs greatest strength, Mitchell and Walker in concert. Manu’s 145 tackle breaks (behind only James Tedesco’s 166 in the NRL) made the Roosters right edge the most dangerous in the game too. Decisions, decisions for the tricolours.

The stat: 94-0. Across the Roosters eight-game winning streak, they are yet to concede a point in the opening 20 minutes, while averaging 12 of their own in the first quarter.

The breakdown: Might and Power. Great horse, fine footballing strategy too – no one does rattling up over the advantage line better than these two when they get it right.

Short and sharp around the ruck is how the Roosters do it best with Matt Lodge and Siosiua Taukeiaho both laying strong platforms on Friday night – big carries from them saw Lachlan Ilias isolated on his left edge the very next play by Luke Keary, twice, for Roosters points.

South Sydney also love a roll-on through the middle to give Cody Walker and Latrell Mitchell time and space, but will rarely chance more than a pass or two until they cross the halfway line. Tom Burgess has averaged 165 running metres coming off the bench in the past six weeks before being pitched into the starting side to combat Lodge and Waerea-Hargreaves’ early dominance on Friday.