Tasmania’s got talent but is it enough? The AFL’s quest for 2026

Richmond co-captain Toby Nankervis will be 31 if his home state is granted a licence to compete in the AFL in 2026.

If the body he has used as a battering ram to help the Tigers to three flags is still operating, he could be a natural fit to take the first bounce of that imaginary first game of a team based in Tasmania. 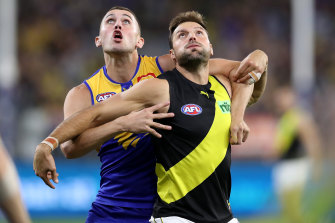 Born and bred in Tasmania Toby Nankervis has won three premierships with the Tigers Credit:Getty Images

But what sort of list might he be leading if that scenario came to pass, as the AFL drags in the best minds in list management to create rules to help a start-up 19th club have an instantly competitive list.

In the preliminary plan outlined in The Age, the fledgling club would be granted priority picks to trade in talent from other teams, allowed to offer signing-on bonuses to attract mature talent from other clubs and given access to Tasmanian-born or based players via an academy.

As this team wants to be as local as the Salamanca Markets and Launceston’s Gorge chairlift, they will hope to entice Tasmanian-born talent back to the Apple Isle.

Attracting that homegrown talent won’t be as hard as finding it with just 25 Tasmanians on the 18 club lists.

Jack Riewoldt might think otherwise, but he can be ruled out from playing as he will be 37 at the start of 2026 and unlikely to be providing the sort of mobility needed under a roofed stadium in Hobart.

Now 29, Brody Mihocek, Jimmy Webster and Ben Brown might be playing coaches but are not certainties to be around in four years, leaving Alex Pearce, Jake Kolodjashnij and the emerging Tarryn Thomas and Chayce Jones as the best of the rest to dive on the list. Gold Coast’s Lachie Weller has enough connection to Tasmania that he might be convinced to move south, but that’s a long shot. 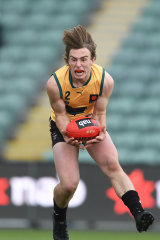 In other words, using the lure of home to build a team will not be enough to get the Tasmanian team within 100 points of the best clubs.

So they will need to get to work on adding resources to state competitions to foster the talent that now sees promising footballers head from Tasmania to mainland state leagues. Norwood’s Baynen Lowe is just one example of a state league player who could, in an alternative universe, stay in Tasmania and progress to a homegrown AFL list.

They will also need to focus on grabbing existing talent from other clubs who may – like former Hawthorn coach and Tasmania ambassador Alastair Clarkson – want to be part of the project regardless of their birthplace.

Alan McConnell, the first person employed at the Giants, said both the Suns and GWS struggled to attract existing talent from other clubs for their first bounce.

However, the Giants made a preliminary final within five years of their first game, adapting their strategy to the reality they faced by signing young talent on godfather offers and experienced campaigners on part-playing, part-coaching deals.

McConnell said signing older players on contracts that extended beyond playing was critical to building a foundation as it made developing the club and the playing list through coaching part of their remit.

“Our guys were playing in losing teams to develop players because they had a long-term commitment to the club,” McConnell said.

“They were very proud players and very proud men because they had reputations to protect so in that context they competed with everything they had, but they had a much longer-term view, and they had to be invested in the development of the kids because that was the career path they were signing up for.”

It’s a good lesson for Tasmania to give mature-age guiding hands an incentive to make the club great. Few of the Suns’ original experienced signings hung around once their playing days were over and their contract expired.

Players such as Bulldogs champion Marcus Bontempelli – who is contracted until the end of 2024 – will be hovering around 30 – while 18 players are already contracted beyond 2025. Names such as Collingwood’s Darcy Moore, Melbourne pair Clayton Oliver and Christian Petracca, and the Giants’ Josh Kelly have deals stretching into 2026 and beyond.

McConnell said the market for those type of players has become more competitive since the Giants entered the competition with many rebuilding clubs wanting those players to assist.

That will make Tasmania’s job harder than it was for the Giants as many clubs now search for players with character who want to guide youngsters as they transition from playing to coaching.

The trick is getting the right people, which McConnell says the Giants did in the four he mentioned, with the club then also able to add talent as their young leaders such as Phil Davis and Callan Ward matured alongside the young crop. 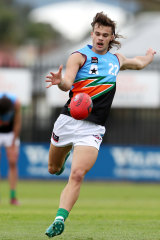 Tasmania’s Lachlan Cowan plays for the Allies this year.Credit:AFL Photos

“Do they have a passion for coaching and do they know what that means or is that just another mechanism to preserve a pay cheque because that is potentially what you are buying unless you are buying the right people,” McConnell said.

The 2026 free agency crop is worth noting, too, as in rough terms it will be filled with uncontracted players from the 2017 national draft who will be finishing their eighth season at the end of 2025.

For example, that includes Cam Rayner, Andrew Brayshaw, Zac Bailey, Aaron Naughton and Will Powell, but their clubs won’t be hanging their credentials in a shop window for Tasmanian recruiters to pursue. In fact, they will be trying to tie them up beyond 2026.

So young talent will, as always, be the key despite the AFL wanting to keep the top end of the draft open so that all clubs can continue to access picks.

Tasmania will obviously have access to home-grown talent, but the annual flow of Tasmanians drafted straight from the Apple Isle has slowed to a trickle in the past decade, with Lachlan Cowan the best credentialed of this year’s batch.

Any plan around list build needs to get people and resources on the ground in Tasmania to take the most talented 12-year-olds and above from local footy grounds to the AFL, with basketball already attracting plenty of those types given the impact of the JackJumpers in the NBL.

Recently departed North Melbourne coach David Noble would be a great starting point for a fledgling club wanting to funnel Tasmanian talent into a Tasmanian team.