Swans coach John Longmire has warned the AFL against over-reacting to the game’s latest ugly incident after Geelong defender Tom Stewart was sent straight to the tribunal for a heavy collision with Dion Prestia that knocked the Richmond playmaker unconscious.

There have been widespread calls for the AFL to introduce a send-off rule after Stewart’s off-the-ball bump on Saturday, something the AFL continues to resist.

“There is no plan to bring in a send-off rule,” an AFL spokesman confirmed on Monday.

While Prestia was subbed out and missed most of the game, Stewart took a match-saving mark with two minutes to play, helping Geelong to a narrow victory which is likely to have a significant bearing on the make-up of the finals.

Richmond’s three-point loss tipped them out of the final eight and Prestia will miss at least one match because of concussion protocols.

“I think, first and foremost, we have to make sure we don’t react to one incident,” Longmire said on Monday. “If we’re going to go down the path of looking at that, there needs to be some more research put into how many times it happens and the impact of it. 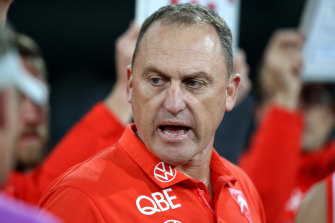 “To just come off the back of one incident and be a bit reactionary, I think, is not the way to go. We need to just have a bit of a deep breath and see if it’s a real issue or not before we talk about supporting it or not.

“What are the mechanisms to make sure you get it right, and who makes that decision is also very important.

“I’m not going to sit here today and say I support it or don’t support it, other than the fact that if it was to be looked at, let’s make sure we do the right amount of research, which I’m sure would happen.

“I think just shooting from the hip and saying you support it or not, without looking at how many times it happens, is probably not the way to go.” 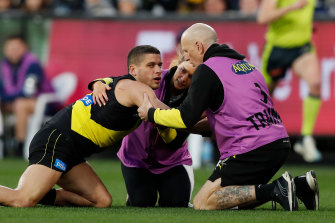 Head trauma: Dion Prestia is in concussion protocols after he was involved in an off-the-ball incident with Tom Stewart on Saturday.Credit:Getty Images

Longmire was Swans coach when former Melbourne player Tomas Bugg struck Sydney’s Callum Mills behind the play in 2017 and was subsequently suspended for six weeks.

“I’m strongly of the view, and have been for virtually my whole career when the vision became good enough for things to be tried by video, there shouldn’t be match-day reports because the risk of an umpire getting it wrong is far too great,” Scott said after the match.

“The idea of sending someone off and getting it wrong in a big game is a risk not worth taking.”